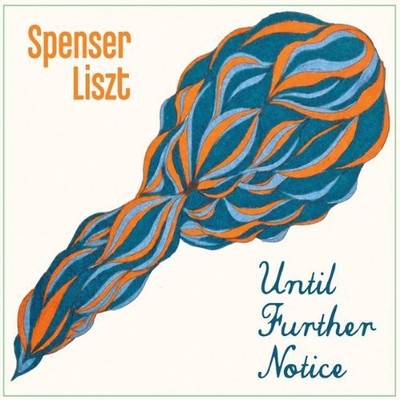 In Until Further Notice, Spenser Liszt establishes himself as a fresh new voice for jazz. His music, melody and motive, brings something that sounds familiar into new form. Spenser's choice of bandmates on this album is genius: Matt Young on drums, Perrin Grace on bass, and Addison Frei on keys (also known as labelmates, AMP Trio). The album opens contemplatively with the odd metered Hyperbolic Time Chamber. Spenser plays an ascending saxophone melody over profound commentary in the rhythm section. Perrin, Addison and Matt are featured in solos before Spenser takes this tune to it's cliffhanger. Relief is a song written about a past love, featuring the voices of Fall River Footmen, Sean Giddings, Mikaela Kahn, and Sean Casey, as well as vocalist Jordan Coffing. Drums and bass lay down a killer groove, toying with one's sense of meter before distant sounding voices float over. The lyrics, "We must find relief," resound between saxophone and keys solos. Everything Addison Frei does is magic, and his solo in this tune will make you agree. In Until Further Notice, tension is felt. Acoustic piano and sustained bass lays a haunting foundation, while drums pull what lies beneath onto the surface. Spenser plays an introspective solo, followed by piano, building up to a maddening release of emotion in the drums. This lays the foundation for the heartbreaking live recording of Mr. David, written about Spenser's late father, to whom this album is dedicated. Where loss reduces and paralyzes most, it inspired Spenser to dig deeper in his journey as a musician. Troll Dance delivers on it's title, playing menacing, descending lines in a deceiving mixed meter. These guys are up to no good. This is fun simply for the images the tune creates in one mind, a bunch of trolls getting down. The perfect song for getting from A to B is heard in The Observatory. The funky groove is laid down by the rhythm section. Perrin Grace digs hard into his strings on the bass solo. Feet will tap, heads will bop. Spenser switches to bass clarinet and wraps the album on Improvisation. Played solo, Spenser appropriately recalls a line from Mr. David. Spenser Liszt's group is a tour de force, presenting Until Further Notice as a beautifully unified album that will inspire listeners to press repeat.

Here's what you say about
Spenser Liszt - Until Further Notice.