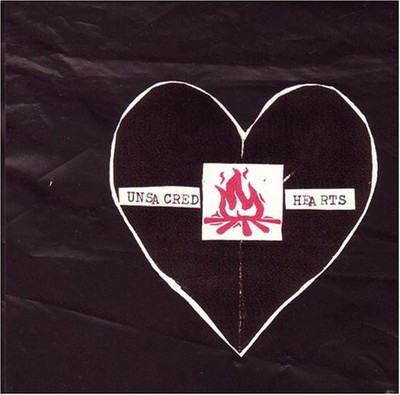 Praise for the UNSACRED HEARTS and their s/t EP 'It's a raw, dark, sexy and dangerous celebration of rock'n'roll.' -Punk Planet 'FOUR STARS...New York City garage-punks deeply in love with their late 70s forbearers. Unsacred Hearts' debut has more character, range and potential than most. A strong first effort if there ever was one. The #3 EP of 2004' -PunkNews.org 'FOUR STARS...recommended without reservations.' -All Music Guide 'The Unsacreds excel at punchy rhythms and jittery riffage.' -The Village Voice 'This seven-song, self-titled CD has some sharp claws. It's a great rock album in the spirit of old NYC.' -Coolfer.com 'I can honestly say that listening to the Unsacred Hearts EP makes me shiver a little bit...loud, catchy, good rock music you don't have to be pretentious about.' -Combustication.net 'Soulfully piledriving blues punk seen through the eyes of some drugged out southern cowboy.' -Smother.net 'Really rockin, feel-good dance-punk.' -Read Mag 'The Unsacred Hearts play gritty, noisy rock nuggets.' -Time Out New York 'The Unsacred Hearts transcend the hipster movement by replacing posturing with passion...Stellar songwriting.' -The Houston Music Review 'That album rocked hard enough to put balls on my grandmother.' -Oliver Anderson, Music Director 89.3 KUGS FM, Bellingham,WA 'Sounds that you could danceably have seizures to, lyrics that are straight forward and honest and a rhythm guitar that makes you blow your load instantaneously.' -Do It Fierce 'Gritty energy [and] heavenly bruised melodies' -Indieville.com 'When it comes to rock and roll, the Unsacred Hearts have an excellent understanding of what it's all about.' -FeelThePunk 'Highly danceable (and compact) rock and roll songs about rock and roll.' -RockingTheScene 'Your new favorite band.' -Concert Hype 'Across seven tracks they proved themselves star students of their 70s forbearers, channeling Richard Hell, the Heartbreakers and others in a collection of tightly wound garage songs about nothing more or less than the subject of rock and roll itself.' -Punk News What do you get when you combine the early-frenzied guitar attack of Sonic Youth and mix in Dinosaur Jr's (or more appropriately Deep Wound's) indulgent attitude? You get New York based Unsacred Hearts. These punk rockers know how to write amazing lyrics and combine them with harsh guitar licks that leave you wanting more. Songs like '1978' and 'Plug Me In' prove this band could have easily survived the scene 25 years ago as well as today. You can definitely feel the streets of New York coming through on this album, as if Lou Reed were turning tricks in your living room! All in all, this self-titled debut EP is a estimate of great things to come. Underground punk played to it's roughest edge, Unsacred Hearts will soon be breaking bottles over your head in a town near you! You have to take a listen for yourself at Unsacred Hearts or Serious Business Records. -Counter Culture 'Having worked in radio for most of my adult life, I hear a lot of new music. Very seldom anymore does a disc hit my player for more than the first minute of each song. The disc from Unsacred Hearts was the first one in a while that made it from start to finish during my 30 minute commute. I was abslutely blown away by the disc. It's music in it's truest form.' -Monk, Independents Only ...and THE UNSACRED HEARTS / MAN IN GRAY Split 7' 'Delicious. Two songs each from two seriously wicked bands ââ?-' what more is there to life? This 7' sees them playing more of their deliciously edgy garage rock, heavy on memorable riffs and solid melodies.' -Indieville 'The subversively clever Unsacred Hearts' stream-of-consciousness vocal delivery fits perfectly with the atomic musical backdrop, making for a listen as captivating as reading Hemingway for the first time.' -Skratch Magazine 'If you're actively seeking new music than Iââ?-â?¢d suggest these bands with their bizarre and quirky undercurrents. But that being said each band has a innate ability to write catchy hooks that even the most cynical rock-n-roll kid would appreciate with full-teeth smiles.' -Smother 'Both bands wreak considerable rock and roll havoc.' -Splendid Bio: The Unsacred Hearts believe in rock and roll. They draw from a wide range of influences: formative punk rock, outlaw country, warped '60s blues, Dylan rhymes and gutbucket soul to name a few. These and other musical strands are apparent in Unsacred Hearts music but never supplant the band's own original noise. They play music that is loud and raw without forfeiting intelligence or experimental drive. They grew up together in Blue Point, NY (65 miles east of NYC on Long Island's south shore) and have operated in various formations since 1995, including most recently the power pop outfit Cold Memory. After that band dissolved, Joe Willie, who had been serving only as outboard lyricist, usurped the microphone and led the band to it's current vision. Soon after forming in late '03, they resolved to record their new music. Holed away in The Shack, a concrete bunker in a nondescript parking lot in Long Island City unequipped with plumbing or heating systems, the Unsacred Hearts crafted their self-titled EP. The Unsacreds' explosive split 7' single with comrades in rock Man In Gray has also just been issued. Unsacred Hearts shows are sweaty, beer-soaked joy rides through rock and roll past and future and have summoned comparisons to Mitch Ryder, Guided By Voices and the Ramones.