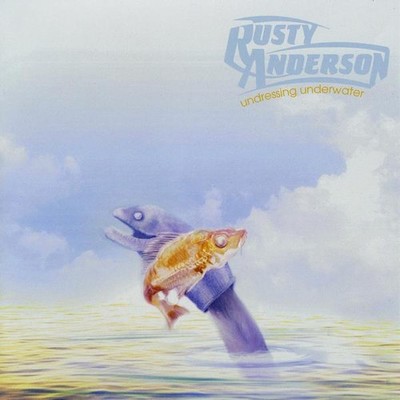 Featuring guest appearances by Paul McCartney and Stewart Copeland, Undressing Underwater shines the spotlight on the guitarist/singer/songwriter career of a consummate musician, who continues to break ground while working with some of the best of his peers. Undressing Underwater showcases Anderson's musical background, which spins through Oscar-nominated and Grammy-winning work, from Paul McCartney, Perry Farrell and the Wallflowers, to Elton John, Courtney Love, The New Radicals and Sinead O'Connor. The ten songs on Undressing Underwater pair Anderson's vocal range with showcase of his talents, from rock guitar to hammered dulcimer and pedal steel. Hurt Myself is the lead track, which is also the culmination of a childhood dream of playing with the Beatles, only in this case it's Paul McCartney playing on Rusty's own album, plus the rest of McCartney's touring band and producer David Kahne. Anderson's background also includes a stint with Stewart Copeland and Stanley Clarke's Animal Logic, and over the years he and Stewart have continued working together. The former Police drummer returns the favor on rocker Catbox Beach. 'My house is filled with billions of cassettes, little scraps of paper and journals. Somehow these bits bonded together and became the CD,' said Anderson. 'Most of the recordings were done in between touring with Paul. In fact, the Hurt Myself session was booked in lightning speed, because after Paul said he wanted to record something, I realized we only had three days in LA before flying to Mexico City to play shows. The songs are mostly about facing one's demons and attempting to bottle them.' Undressing Underwater was recorded at Oxide Studios in Southern California, plus Sunset Sound and Henson Studios, and was self-produced by Anderson, along with David Kahne, Mudrock and Parthenon Huxley.

Here's what you say about
Rusty Anderson - Undressing Underwater.