Thief in the Night - Under the Influence 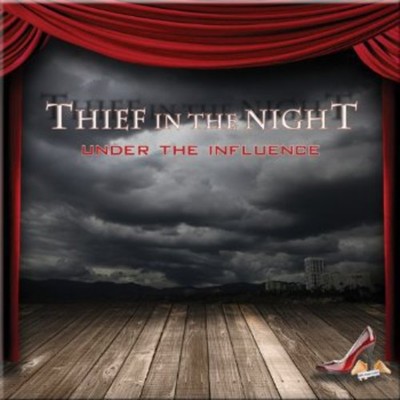 Combine elements of Soundgarden, Alice in Chains, Black Sabbath, Alter Bridge, Metallica & the like, you'll find the high energy & hard rocking 'Thief in the Night' sound. Songs filled with heavy guitar riffs & soaring melodies from Johnny Rossa's powerful vocals & Chris Van Duyn's infectious guitar work. Thief in the Night brings a fresh modern sound with their heavy, melodic hard rock clearly rooted in classic rock bands. Guitarist Chris Van Duyn and power vocalist Johnny Rossa bring on high energy songs including 'Chasing Utopia' which you can't help but to struggle with driving over the speed limit, heavy riff driven 'Breaking Through' to the instrumental title track 'Under the Influence'; the powerful but beautiful love song 'No One Else' and more all will leave you both satisfied yet undoubtedly yearning for more. With the priceless support of world class musicians Rafael Moreira producing (and playing bass) and Randy Cooke on drums the project is a true powerhouse. 'Under The Influence' is the band's first album, 'When we set out to start the album the objective was to have it ROCK while being organic, tight and something easily reproduced live,' says guitarist Chris Van Duyn. 'It's clear we accomplished that goal as the album sounds HUGE but is not layer upon layer of overdubbed guitars and vocals that would never be able to be reproduced in a live setting.' Although the album starts off with Van Duyn's heavy guitar riffs that drive the songs, the powerful vocals of Johnny Rossa takes the songs to a whole other level and cement the power of the fresh sound created out of the classic guitar, bass and drums rock band. With comparisons to more contemporary bands such as Soundgarden, Alter Bridge, they are clearly rooted in the classics of Led Zeppelin and Black Sabbath (with a little Rush thrown in). The sound is never trendy but is clearly ROCK from beginning to end. They hit you with a lot of energy. Johnny Rossa's vocals are amazing and bring these songs to life with such passion and energy. Guitar World Magazine writer David Reffet and hard rock and heavy metal guitarist/singer/producer who founded the band "Shredding the Envelope' says of Rossa's vocals, "reminds me of my buddy Neil Turbin who sang on the first Anthrax CD 'Fistful Of Metal.' "Truly one of the best and most powerful vocalist around" adds Van Duyn "and by far the most humble and nicest guys I could hope to get to work with". Rossa brings his skills and experience to 'Thief in the Night' that include work with some of the best including Mark Tremonti of Creed/Alter Bridge; members of Pink, Bush, Cheap Trick's bands to name a few and has toured with artists such as Puddle of Mudd whom he played harmonica and keys for on the road which included an appearance on the Tonight Show with Jay Leno. 'The vocal in this one is slaying!' says Randy Cooke who provided his incredibly powerful and always tasty yet technically sophisticated drum work to the album. Cooke has recorded and toured with a lengthy list of artists including Five For Fighting, Smash Mouth, Kelly Clarkson, Ian Gillan (of Deep Purple), Colin Hay (of Men at Work), Mick Jagger to name a few as well as toured in Ringo Starr's band. Randy currently resides in Los Angeles where he maintains a busy recording/touring schedule. Eclectic artist, song writer and highly acclaimed guitarist Rafael Moreira produced the album's primary five, full band performances as well as plays bass and co-wrote four of the songs. "I'm proud of what we accomplished" says Rafa, whom is by far no stranger to creating great rock music. Besides his own powerful rock trio Magnetico, Rafael has performed as lead guitarist and backing vocalist with some of music's most recognized artists, ranging from and including Paul Stanley (KISS), Don Felder (The Eagles), Steven Tyler (Aerosmith), P!nk, Christina Aguilera, Stevie Wonder, Dave Navarro, Natasha Bedingfield, Tommy Lee, Sheryl Crow and many others. Van Duyn first heard Rafa when he gained a broader fan base while appearing in the House Band for CBS's Rock Star: INXS and Rock Star: Supernova. He has been drawing fans of broad musical tastes with his intricate guitar-heavy songs and thought-provoking lyrics. "Having Rafa bring that experience and expertise to produce this project has been a honor as he has brought the very best out of every aspect of the songs, the musicianship, the entire sound and so much more," says Van Duyn. Legendary vocalist, songwriter and actress Dilana says this about the album, "It sounds sick! I have a feeling this CD is gonna go places!" 'Reminds me of the good old rock days! Deep Purple, Thin Lizzy, Zeppelin, ' says Ken Roberts who recently engineered acoustic 'unplugged' tracks for Van Duyn & Rossa. "Reminds me of one of my favorite albums of all time, 'Bridge Of Sighs' by guitarist Robin Trower's" adds Roberts. Turn it up! You won't want to miss this one.

Here's what you say about
Thief in the Night - Under the Influence.