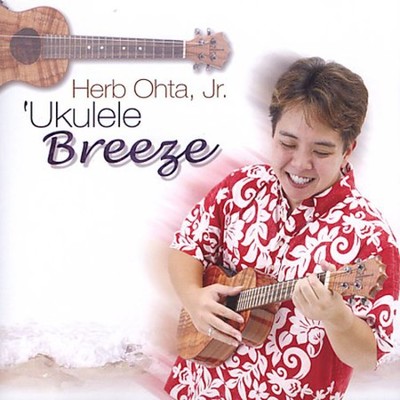 "The Heart of The 'Ukulele" Herb Ohta, Jr. The 'Ukulele is the best-known Hawaiian instrument. In the 1950's and 60's all the bands had 'ukulele players. Some of the great musicians that made the instrument very popular were: Eddie Kamae, Ohta-san, Lyle Ritz, Don Baduria, Sr., John Lukela, Jesse Kalima, Kahauanu Lake, and Peter Moon. Today there is a renaissance of sorts, thanks to the popularity of the new generation of 'ukulele players influencing the young people of Hawai'i to pick up and learn to play; Troy Fernandez, Kelly-boy Delima, and Jake Shimabukuro. Herb Ohta, Jr. is just one breed of 'ukulele players. Herb's interest in music was very evident at an early age. Herb's grandmother taught him his first song on the 'ukulele at the age of three. The song was "Happy Birthday." His father, Ohta-San started his early instruction on the 'ukulele and Herb continued to study music playing the viola in high school. Herb was also a member of The Honolulu Boys Choir, The Honolulu Children's Opera Chorus, and The University High School Select Choir. Herb continued to take formal lessons from his father until he was 12 years old, because he started to have other interest. After being inspired by listening to the Makaha Sons of Ni'ihau and other local musicians at the age of 17, he became a devotee of Hawaiian music and the 'ukulele. The 'ukulele is in his genes and Hawaiian music is in his blood. Herb enjoys listening to all types of music, Classical, Jazz, Pop, Rock, Country, Hip-hop, Rap, Latin, Salsa, and Reggae. But Herb's favorite songs to perform are anything Hawaiian and any types of ballads. He feels that Hawaiian songs and ballads bring out the natural purist sound of the instrument. Herb's style is reminiscent of his father, but distinct and recognizable as his very own. There is a graceful "Nahenahe" quality that is very Hawaiian, reflecting the inspirations of 'ukulele virtuoso's Eddie Kamae and of course Ohta-San. At 11 years old, Herb, Jr. began to teach for his father's 'ukulele school occasionally while his father traveled away from home for business. In 1992, Herb started his own 'ukulele classes and continues to teach at Sonny D's 'Ukulele Shop in Waipahu, O'ahu, Harry's Music Store in Kaimuki, O'ahu, and teaches Japanese visitors by appointment. Teaching six days a week, Herb also finds time to compose new material, entertain at private and public functions, produce, and record. His recording debut was in 1990 on his father's recording. Since then, Herb has recorded on over 50 recordings. He is a seven-time Na Hoku Hanohano Award Nominee and a two-time Hawai'i Music Award Winner. Herb's has released 2 national releases in Japan and co-authored two 'ukulele instructional books with Grammy Award artist Daniel Ho that was released in Japan and the United States. Herb has also traveled to Virginia to perform at the world-famous Wolftrap in front of nearly 7000 people. Herb has shared the stage with many of Hawai'i's legendary artists; Ledward Kaapana, The Makaha Sons, Dennis Kamakahi, The Lim Family, Kapena, Cyril Pahinui, George Kahumoku, Ohta-San, Ka'au Crater Boys, The Brothers Cazimero, and Daniel Ho to name a few. As a teacher, composer, recording artist, entertainer, and producer, Herb Ohta, Jr. solidly establishes himself in the company of musicians who promote our Hawaiian instrument in the music landscape today. It is Herb's goal to share the beauty of Hawai'i's music, it's culture, and the 'ukulele to people all over the world. Herb has performed throughout the state of Hawai'i and has traveled overseas to Japan and the mainland USA. Herb Ohta, Jr. is certainly a vanguard in this new generation of 'ukulele players. Hawaiian music legend Peter Moon writes: Herb Ohta, Jr. - young and organized, seems to have found his path in the world of music. In this recording, he expanded his variety of songs and the color he uses are bold. They paint an indelible picture of his artistic thoughts. So sit back, relax, and let yourself journey to places familiar and for some, only in dreams. Herb's artistry paints a rainbow seen in places felt from the heart.

Here's what you say about
Herb Ohta Jr. - Ukulele Breeze.