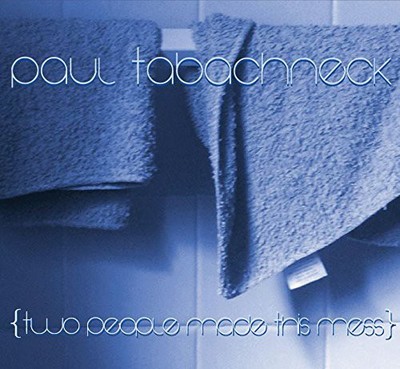 Sound matters to Pittsburgh-born singer-songwriter Paul Tabachneck. The precision levels on a soundboard, the right piano fill to compliment a chord structure, the sweet spot between sharp and flat. When it's good, his perfect pitch let's him bliss out on the harmony between rhythm and lead. But when it's bad - knuckle-cracking, gum-popping, forks-on-plates bad - his misophonia (literally, "hatred of sound") tells him to fight or flee the sound. "Misophonia isn't a tiny issue for me," Tabachneck says. "It's been a huge part of my life since before I could name it, and it's been to blame for a lot of my life's failings, because when my crazy would come out, I had no way to make people understand - Hell, I had no way to make myself understand what was going on." With his fifth full-length album as a solo artist (and twelfth release to date), Two People Made This Mess, Tabachneck seeks to understand more than just his misophonia - he digs into his previous crash-and-burn relationships and comes out with fifteen soulful folk rock gems, providing steel-string therapy with a catchy beat. The album follows his progress from dysfunction and depression to happiness and acceptance. As he says, "It's the story of the last 'Shawshank' river I had to crawl through to get to [his fiancée] Ana." "When people tell me I'm brave to put myself out there, I feel like, how is this not the norm?" he says. "What's the point, if we're not all trying to be honest and real? With this album, though, I feel like all of the Band-Aids are ripping at once." It seems to have worked - he proposed to his fiancée with the tender and upbeat "As Long as You Want Me To," for which he made a Banksy-themed lyric video. "Of all the albums I've made since [1999's] Glutton's Dozen, this is the one that comes closest to sounding exactly like it did in my brain," Tabachneck said. "Once we had the basic tracks (vocal and guitar rough tracks), we knew where we wanted to take things. It happened very fluidly. It wasn't quick, but it wasn't hard. The hardest part was the commute." He credits that natural working environment to his collaborator, co-producer Brandon Wilde, who added bass and backing vocals to the album. The album was recorded nearly entirely at Wilde's space in Brighton Beach. In addition, he had the band, Broken Fences, backing him up for their last week as a band, along with Brad Gunyon (All-Night Chemists, Black Bunny) Michael Bellar (As-Is Ensemble, Howie Day), and Jesse Prentiss (Ritual Space Travel Agency, Pete Bush and the Hoi Polloi), as well as independent NYC recording artist CKay, who duets with him on the tongue-in-cheek 'You're Mine.' His CD is available right now from Bandcamp and he'll be celebrating the CD release in Pittsburgh, PA, on Sept 5 at Mr. Small's, w/ Liz Berlin Band, A.T.S., and others and in New York City at a date to be determined later.

Here's what you say about
Paul Tabachneck - Two People Made This Mess.