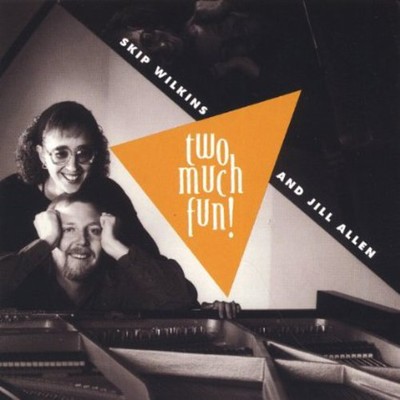 During three decades of performing, jazz pianist Skip Wilkins has played with many great musicians, including saxophonists David Liebman, Stanley Turrentine, Bobby Watson and Plas Johnson; vocalist Mark Murphy; trumpeters Clark Terry and Conte Candoli; trombonist Al Grey; bassist Milt Hinton; drummers Bob Moses, Joe Hunt, and Peter Erskine; and flutist Jill Allen. Skip Wilkins and Jill Allen released their first CD together, "Two Much Fun!," on Eaglear Records. Wilkins and Allen made this piano and flute duo recording in Colorado and released it nationally after they moved to Pennsylvania and New York City, respectively. "Two Much Fun!" is a very intimate album featuring arrangements of standards and original compositions by both Wilkins and Allen. Wilkins and Allen released their second CD together, 'Petty Theft,' on Cathexis Records. The CD features the Wilkins & Allen Quartet and Grammy-nominated saxophonist, David Liebman. Liebman performed with them on Jill's 'Skip & Me,' and on 'Hovering,' which Skip wrote for Liebman. "Petty Theft" has a lot of range-it is lyrical and edgy. Wilkins and Allen enjoyed many highlight performances together, including New York's Tavern on the Green and The Wichita Jazz Festival, and tours all over the United States. David Liebman performed with their quartet as featured guest numerous times. Wilkins is a 2001 fellowship recipient from the Pennsylvania Council on the Arts. He was given the award for excellence in jazz composition. Many of the compositions for which he was recognized were included on 'Petty Theft.' Wilkins and his new quintet recently completed two new recordings of eighteen of his compositions. The first of two CDs will be released in the fall of 2006, with the second to follow one year later. Please visit skipwilkinsjazz.com for updates. Wilkins has an active presence in education in Pennsylvania. In addition to his private home jazz piano studio, he is Assistant Professor of Music at Lafayette College in Easton, where he teaches courses in Music Theory and Jazz. Before he accepted the full-time appointment at Lafayette, Skip taught jazz piano students for five years at Moravian College in Bethlehem and at Muhlenberg College in Allentown. Previously, Wilkins taught at the University of Northern Colorado, spending many of his eight years there in the nationally acclaimed Jazz Studies program. He holds his undergraduate degree from Holy Cross College, and a master of music degree from the University of Northern Colorado. He also studied jazz composition and arranging with Herb Pomeroy at Berklee College of Music in Boston, and is a former faculty member at Berklee.

Here's what you say about
Skip Wilkins - Two Much Fun!.