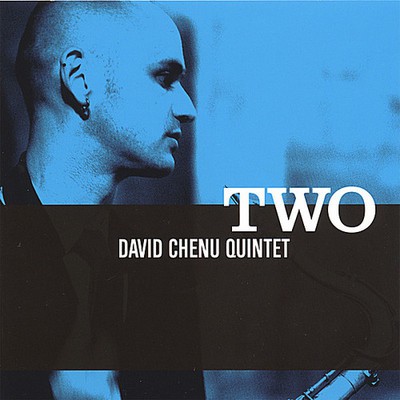 ABOUT 'TWO': "TWO" features all original instrumental jazz compositions which draw from a diverse range of styles from classically infused harmonies to the blues, while staying remarkably melodic and listenable for a jazz record. 'TWO' is mature, introspective and original. Recorded live in pianist Evan Jacobs' living room onto analog tape with absolutely no edits, splices or overdubs, "TWO" captures an organic and unadulterated performance rarely heard on modern recordings. David Chenu, saxophones Jacob Wise, guitar Evan Jacobs, piano Beau Sample, acoustic bass Jason Friedrich, drums __ ABOUT DAVID: David Chenu, saxophonist and clarinetist, is widely sought after as a performer, educator, and arranger with over two hundred performances a year. The David Chenu Quartet, performs in many popular jazz venues and festivals, as well as numerous concerts, clinics, and private events. Their first CD, simply titled "ONE", was released in 2003, and features all original compositions. Their second CD, 'TWO', also of all original music, is due out in 2006. David and his group have been voted as one of the top ten horn players and jazz bands respectively in the Austin Chronicle's 2002-3, 2003-4, 2004-5, and 2005-6 Austin Music Awards. In addition to his own band, you can also hear David performing with many other groups of all styles including Olivier Giraud's Django Reinhardt influenced project, Paris 49, jazz singer Seela and her band Torch, and with nationally touring polka band Terry Cavanagh and the Alpine Express. Notable performances include a stint at Disneyland Paris, performing for Jessica Simpson's Instyle wedding, opening for saxophone legend David "Fathead" Newman, opening and performing with Jimmie Vaughan, performing with Texas Playboy Johnny Gimble, and performing with Rock & Roll Hall of Fame band Lynyrd Skynyrd. After two Texas All-State appearances in high school, David was the recipient of a full scholarship to the prestigious University of North Texas School of Music and graduated Magna Cum Laude with a degree in jazz performance in 2000.

Here's what you say about
David Chenu - Two.