Jeff Caudill - Try to Be Here 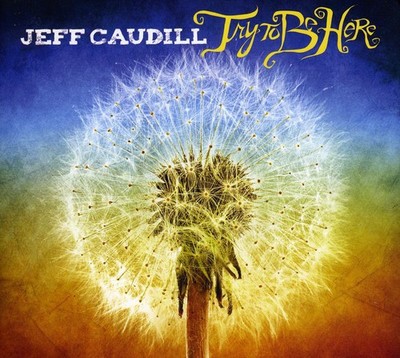 It's not the destination, it's the journey. Not many artists stay relevant to their fan-base over a sustained period of time, but Californian singer-songwriter, Jeff Caudill, is one such rarity. Shooting to prominence with punk-pop band, Gameface, in the early 1990s, his irrepressible knack for a memorable hook and melody quickly established a dedicated following. Never standing still, he led the band around the globe, gradually shedding the youthful exuberance for a string of increasingly mature releases, before finally abandoning the tour van in 2003. Music is in his blood and it wasn't long before Caudill reappeared, acoustic guitar in hand. Rather than signalling a new direction, the new, earthier sound was a logical progression from his punk roots. The release of acclaimed debut album, 'Here's What You Should Do', confirmed this was an artist equally comfortable mixing up pop, indie and alt-country to create something fresh. Never one to shy away from putting the hard yards in, a steady stream of releases followed, with time even found for a successful foray into electronica with side-project, Floormodel. Still wearing his heart on his sleeve and fiercely independent, the release of new album, 'Try to be Here' promises to win over a new raft of fans, as well as provide a convenient jumping on point for any who may have lapsed. The trademark pop sensibility burns as bright as ever, but the lyrics are sure to connect with his loyal fan-base, confirming him as a man in thrall to his family and comfortable in his own skin. Upbeat and warm, 'Try to be Here' represents another urgent step forward. Back with a band once again and showcasing his strongest material yet, this is the sound of Jeff Caudill in his natural environment and at the top of his game. _ _ _ _ _ _ _ _ _ _ _ _ _ _ _ _ _ _ _ _ _ _ _ _ _ _ _ _ _ _ _ _ _ _ _ _ _ _ _ _ _ "If you're a fan of American bands such as The Replacements, REM and The Lemonheads, you'll find something here for you" - Whisperin' and Hollerin' "Some of our best singer-songwriters come from long-standing rock bands, Caudill's career is just starting" - Mean Street Magazine 'Caudill comes through with winning, heart-on-sleeve urgency and sincerity' - Los Angeles Times "Caudill's trump-card is his ability to craft instantly memorable songs that swing with an outrageously catchy hook." - Joyzine "The second coming of [Michael] Stipe." ?- San Diego Troubadour "He just takes a simple song, gives it the right vocal treatment, leaves out the superfluous and serves up a fine performance time after time." - Americana U.K.

Here's what you say about
Jeff Caudill - Try to Be Here.