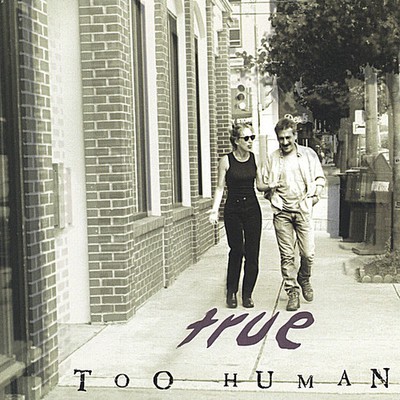 Late Breaking News from Too Human A track from True, 'New Surrender,' is included on the latest compilation CD from the Garland Appeal. The Garland Appeal was founded with the support of Paul McCartney to honor Linda McCartney and to raise funds for cancer research. This CD, entitled Familiar Mysteries, contains 20 songs contributed by independent artists from across the US. The CD is a soundscape of hope, healing, and love.. Too Human Bio Hailing from New York, both Ellen and Roger have had music in their lives from a very early age. Roger was an accordion virtuoso by the time he was 7 and Ellen was harmonizing by the age of 3. Over the years they both explored different musical genres and instruments, but what remained constant was singing, the song and the passion. They eventually became professional songwriters in Los Angeles, on staff with publishing giant Warner/Chappell Music, where they had their songs recorded by a broad spectrum of recording artists including Cher, Pat Benatar, Teddy Pendergrass, Martha Davis, Angela Bofill, Anne Murray, and Nancy Wilson. When they moved back east and became Too Human, with Ellen on guitar, keyboards, and vocals and Roger on percussion, keyboards, and vocals, and the occasional addition of 'Studio Stu,' a bebopping washtub bass player, their diverse musical influences merged to create a sound that has been described as edgy, blues/jazz influenced contemporary folk. The songs are personal, topical and relevant in the singer/songwriter tradition, ranging from hilarious dog put-downs, and relationship and self-discovery themes to issue oriented songs about homophobia, battered women and elephant slaughter -- all with gritty, heartfelt vocals, great harmonies and driving rhythms. Ellen's voice combines earthiness with sensuality, innocence, and passion. Roger's unusual percussion style and backing vocals complement her perfectly. As one radio programmer said after a live performance, 'Singing with passion and joy, Ellen's driving earthy voice blends and contrasts with Roger's smooth soaring vocals. Their sheer love of music is infectious as is their chemistry. ...Too Human put smiles on our faces ...' In performance they are totally in sync with each other, creating a strong and intimate atmosphere. They perform regularly in the Northeast (The Kennedy Center in Washington, DC, The Bottom Line in New York, The Kendall Cafe in Boston, The Tin Angel in Philadelphia, to name a few), and at schools, libraries, coffeehouses, clubs, civic concert series and outdoor venues such as festivals (Falcon Ridge Folk Festival Artist Showcase 2001), 4-H fairs and crafts fairs. They've opened for 10,000 Maniacs, Janis Ian, Martin Sexton, Livingston Taylor, Garnet Rogers, Kenny Rankin, Kim & Reggie Harris, Susan Werner, Jack Williams, Les Sampou, and Dave Mallett, and have shared the stage with David Amram, Mae Robertson and Eric Garrison, Dave's True Story, Bill Parsons, Holly Penfield, Pam Bertoli, Trainwreck, Sloan Wainwright, and Wishing Chair. They have appeared live as featured artists on WFUV with Meg Griffin and John Platt, WXPN with Gene Shay, WRPI with Sonny Ochs, WCUW with Richard Fox, WVIA with George Graham, WWUH with Ed McKeon, WRTC with Amy Jeffries, WPKN with Mike Horyczun, Pam Smith and Stephan Allison, WHUS with John Sloan, and many others.

Here's what you say about
Too Human - True.