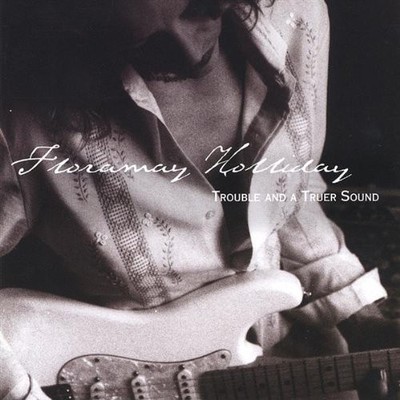 Floramay Holliday Austin, Texas bio Floramay Holliday is a six-foot passionate blond with a poetic name, a red Fender Strat, a soulful voice and songs, and a high-energy stage presence. Holliday's new CD, Trouble & a Truer Sound, is a seamless mixture of American roots music - country, rock, bluegrass and blues- that captures her band's live sound. The CD features duets with Guy Clark on his 'Anyhow I Love You' and with Asleep at the Wheel's Ray Benson on the first track, 'Baby's Back in Texas'. Holliday's voice and songwriting have matured in the five years since her self-titled debut, released on her own label, Roseneath Records, and picked up by more than 20 radio stations in the United States and Europe. Formats ranged from rock to contemporary to gospel to independent. Holliday grew up in a musical family in South Carolina where her Houston-raised father made the name 'Austin' synonymous with 'music.' With a major in Media Arts from the University of SC, Floramay was a freelance and biomedical photographer, all the while pursing her love of music in coffee shops and local theater performances. When it was time to leave home, the 'Live Music Capitol of the World' was the natural choice. Family is important to Holliday. The Carolina debutante grew up on Roseneath Farm, in Florence, named for Roseneath Castle of her ancestors on the Isle of Sky in Scotland. She's also kin the infamous western figure John Henry 'Doc' Holliday. Her grandmother, Floramay Holliday McLeod, was the first Miss South Carolina. 'I'm very close to my family and where I'm from,' Holliday said. 'I was raised on Hank Williams, Guy Clark, and Willie Nelson - listening to music and dancing with my father in the library. All the children would gather around and that was our family time. We created a family band called the Roseneath Ramblers, and we try to have at least one show a year.' When her grandmother died at age 93, Holliday headed for Austin with her dog, Cody, to record her first CD in 1998. Within two years - Nov. 2, 2000 - she got her own 'Floramay Holliday Day'. Declared by Mayor Kirk Watson, she was recognized for her contributions in the music comunity, including live performances with her band, teaching Pre-school music classes, performing for nursing homes, and working extensively on several photographic projects for Austin City Limits. 'Being in Austin has just been incredible,' Holliday said. 'People really appreciate music, and when you're playing for people who appreciate it, the energy comes right back to you. It's a mutual thing. Austin just seems to attract good souls.' She was twice voted best local performer in her hometown. Recent industry showcase performances include: Fox 7 News at Noon, Austin's SXSW rebel showcases, Nelson's 4th of July Picnic, Luckenbach's Best of Texas Ladies Songwriters, historic Gruene Hall's Women in Texas Music, Old Settler's Music Festival, a tribute to the Funk Brothers at Austin's Paramount Theater, and performances in Hungary, Spain, and Greece. She also did a cameo in the award-winning film 'Grand Champion' with Bruce Willis and George Strait. The sound track for that movie featured her song 'Mystery' and she also has a song, 'Silver Highway,' in the independent film 'Knocked Up'. Putting words on paper began as a personal form of therapy that, combined with the music, became a positive experience. 'Songwriting to me is like divine intervention, like it's not really anything I control. It just really comes to me, and it's almost like the song is out there and I'm being used as an instrument to make it happen.' 'When I know that I'm singing it for other people - it's not just for me - I want to give a positive message,' Holliday said. Holliday and Shelley King often share the stage as a duo named S.A.S.S., the South Austin Soul Sisters, and co-founded the all-girl southern-rock band, Sis Deville, with Austin legends Carolyn Wonderland, Ann Marie Harrop, and Lisa Pancratz. She and King also perform in a beauty shop quartet, the BBQTs, with Toni Price and Leeann Atherton. All of that makes for a busy schedule, but there's always time for the new CD. Holliday co-produced Trouble & Truer Sound on her own Roseneath Records label. The CD is dedicated to the memory of drummer Kris Van Robbins. Other band members are Arty Passes (pedal steel and harmony vocals), Jon Sordoni (electric guitar and harmony vocals), and Mike Rieman (bass and harmony vocals). Guest musicians in addition to Clark and Benson are Shelley King, Bobbie Nelson on piano, Holliday's sister, Nelson Holland, on harmony vocals; her brother, Dewey Nelson Ervin, on harmonica; Eleanor Whitmore on fiddle; Casper Rawls on electric and acoustic guitar; and Verlon Thompson on classical guitar. Roseneath Records PO Box 50147 Austin, TX 78703 [email protected]/ Floramay.com.

Here's what you say about
Floramay Holliday - Trouble & a Truer Sound.