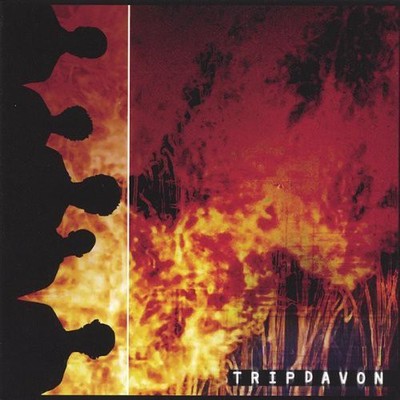 TRIPDAVON Justin Fox: Lead vocals Greg Doscher: Guitar Adam Coons: Guitar Dave Heer: Bass Russ Cummings: Drums 'Trip-da? Trip-da? Tripda-vons?' was a familiar and often-shouted refrain bouncing off the walls in the band house in Santa Barbara, California. No, it wasn't a call to the band members; it was the sound of five hungry young men taking a break from their rehearsals to make a food run next door. Well, it appears that that corporate grocery chain may soon be immortalized on the music charts as Justin, Greg, Adam, Dave and Russ have adopted the name for their year-old band. The tongue-in-cheek decision also gives you some indication of how these guys roll-smart, sassy and witty, just like their music. So, take five young guys in their early twenties and what do you have? You have several college degrees and tons of experience in responsible grown-up jobs, but you also have over 50 years of collective musical experience in every genre from jazz to funk to rock and pop. When the stars aligned and the guys met and decided to jam together, Tripdavon was born. There is some heavy thinking going on here. In a rock world that has become increasingly pop-oriented, Tripdavon provides the thinking man (and true music lover) with an alternative. There are no tricks, just great songs, stellar musicianship and incredible live stage presence. There is nothing wimpy about Tripdavon's music; the band excels live, performing excellent straight-ahead rock that'll suck you in. And if you're lucky enough to catch them, here's whom you'll meet. Drummer Russ Cummings comes from a pure jazz tradition (his mother, a jazz singer, still performs regularly), and has been performing since the age of 6. In fact, Russ was so accomplished at such a young age, he was often asked to back-up professional cats, but had to turn down gigs for years because he couldn't meet the age requirement at the clubs. His rhythm section partner, bassist Dave Heer, soon developed a new set of chops after hooking up with Russ; he learned early on to pop and slap listening to funk bassists, Les Claypool, Victor Wooten, Stanley Clark and Flea, and had been experimenting with a rock/funk hybrid prior to joining the band. The guitarists of Tripdavon who both originally hale from the east: Adam Coons, a Long Island, New York surfer, who honed his chops having to stay indoors in the frigid northeast winters and New Jersey native, Greg Doscher, whose guitar-playing influences, David Gilmour and Tony Iommi were bending their guitar strings long before Greg was even born. Adam still surfs daily (axe-wielding duties permitting) but has since shifted his focus from pursuing a surfing career to his passion of writing and performing with Tripdavon. And you know, we're confident that Greg will be able to match up against his idols, Marshall-stack lick for musical lick. And then there's lead singer Justin Fox. Justin grabbed his first mic at the age of 6 to record a demo of 'New York, New York,' but that was not his career defining moment. Opportunities to sing and perform kept arising in-between his forays into sound engineering and building and running recording studios. But it wasn't until he threw his lot in whole-heartedly with Russ, Dave, Greg and Adam that he found the focus in his life. Now, who said 'Rock Is Dead?' With Tripdavon, Rock lives on.