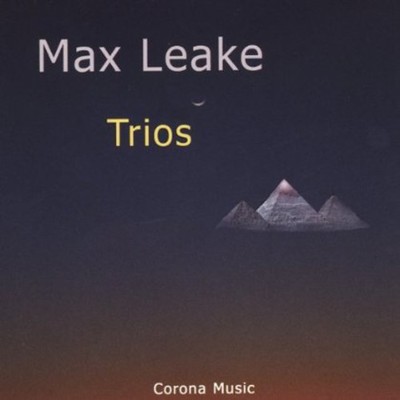 'Trios' is pianist/keyboardist Max Leake's first release under his own name in 18 years. The CD features Max in an accoustic trio setting with 2 distinct but equally great groups. Bassist Dwayne Dolphin and drummer Greg Humphries are old friends and share 25 years of musical history. Bassist Paul Thompson and drummer Tom Wendt are 'youngsters' on the scene and are making their own mark. The song selection on 'Trios' covers a wide swath of musical ground with standards such as 'Just You, Just Me' and Johnny Mandel's 'A Time For Love' to Bop tunes like Bud Powell's 'Crazeology'. Then turning to a reharmonized version of Joni Mitchell's 'Both Sides Now' and flipping over to 'Harlequin', Wayne Shorter's composition that was recorded by Weather Report on 'Heavy Weather'. In the end everything is pulled together into a cohesive, swinging and energetic presentation. BIO Max Leake began his musical training at age six. By the time he was 15, he was working with local Pittsburgh bands and backing up national acts in local supper clubs. At the age of 18, Max was traveling around the country with acts such as the 'Ink Spots' and the 'Marcels'. Max spent time playing in show-bands in the Catskill Mountains of New York backing up variety acts, comedians and singers. He also cruised around the Western hemisphere as house pianist in the showbands on many different Princess Cruise ships. In 1985 he released his self-produced album 'Buns in the Sun' on Visionary Records, a record label started by Max and Mike Hurzon (owner of the 'Tracking Station', an independent record promotion company). The album drew widespread airplay nationally and was reviewed favorably by many newspapers and trade publications. Max has gone on to produce, compose for and record with dozens of other artists including Mesa Blue Moon recording artist 'Tim Eyermann and East Coast Offering', Heads Up records artist 'Kenny Blake', 'Salsamba', 'Billy Price' and the 'Balcony Big Band' on Corona Records. Max has been recording, composing, arranging and performing for 27 years with some of the best jazz and blues artists in the world including Roger Humphries, Stanley Turrentine, Rick Margitza, Dwayne Dolphin, Henry Johnson, Rebecca Parris, Billy Price, Joe Negri, Sandy Staley, the Manchester Craftsmen's Guild Orchestra, Tommy Tedesco, David 'Fathead' Newman, Don Laterski, Al Dowe and Etta Cox and the Balcony Big Band, just to name a few. He was voted 'Best Jazz Keyboardist' in the In Pittsburgh music awards in 1989, 1991 and in 1995. Ten years ago, Max began composing and performing music for websites, videos, planetarium shows and CD-ROMs for various advertising and multi-media production companies with his own home-based music production company. Five years ago he joined forces with CommerSel Studios, a Pittsburgh Web and Multimedia design studio, where he was 'manager of multimedia services' and a senior IT consultant. He is currently an independent consultant and actively performing, composing, arranging and producing for live performance, multimedia and recordings.

Here's what you say about
Max Leake - Trios.