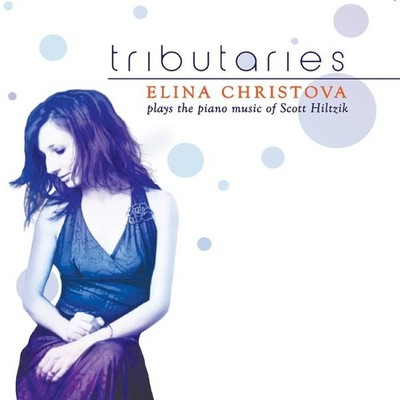 On Tributaries, pianist Elina Christova ravishingly plays the music of Scott Hiltzik. Her musical depth and technical virtuosity shine through this recording of lyrical, intelligent and moving contemporary piano works. 'Scott Hiltzik's music is gorgeous, unapologetically so', composer Daniel Felsenfeld comments. 'The solo piano music on this disc lives in the vivid sonic worlds of Chopin crossed with Ravel, the virtuosity of Liszt by way of Bill Evans, the flexible but fluid unpredictability of Brahms served up with the occasional hint of bite courtesy of Shostakovich or Prokofiev.' ' ...Here in the post-atonal world composers are often made to question and doubt their right to write moving music. And where contemporary composers can be afraid, the music of Scott Hiltzik plays as unassailably hewn to this awesome tradition. It comes as a nice surprise-little torpor, no madness, just deftly made harmonic gestures supporting lilting, even sing-able, melodies.' Hiltzik's compositions seamlessly integrate the classical tradition of the great composers, jazz, musical theater, rhythm and blues and world genres, mixing them together to create his uniquely beautiful sound. His music has been performed by the Baltimore Symphony and the San Francisco, Atlanta, Detroit and St. Louis Symphony Orchestras, as well as the Boston Pops, and the Bay Brass of San Francisco. Elina Christova has performed extensively in Bulgaria, Europe and the United States, including Weill Recital Hall at Carnegie Hall. She has won several national and international competition prizes. Live recordings of hers can be found in the archives of Bulgarian National Television and Bulgarian National Radio. She is strongly committed to performing new works. A simplicity and honesty connects all this music, whether a lyrical adagio, a virtuosic toccata, or a piece for piano and handclaps. This is music to unapologetically enjoy.

Here's what you say about
Elina Christova - Tributaries.