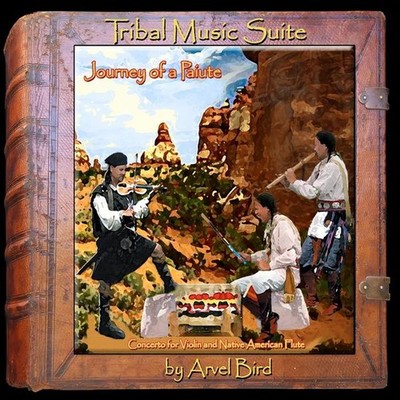 'Bird's music has been dubbed 'Global Native Fusion' and for good reason. The 2007 Nammy award winner for Artist of the Year incorporates an eclectic mix of styles into his music. An experienced professional who has toured with many legends of country music - including Glen Campbell, Tom T. Hall and Loretta Lynn - Bird is proficient playing everything from bluegrass to classical, Celtic (he's part Scottish) to New Age. His latest record, Tribal Music Suite: Journey of a Paiute, is a historically accurate instrumental concept record focusing on Native American hero Quaninch, his life journey, and the impact of Europeans on Southern Paiute culture. Songs such as 'Birth and Tribal Life,' 'Healing Waters of Love,' and 'The Journey Home' unfold before the listener like a favorite novel. Originally written for symphony orchestra performance, Tribal Music Suite makes for some very theatrical flute music. But don't let the neoclassical overtones intimidate you - this is a sublime record. ' - By MICHAEL LOHR - Cowboys and Indians Magazine 'It is about what we know and love and the bond that exists between the blood and the land. It is in the drum and the human voice. I hear it. I feel it.' 'Tribal Music Suite Chronicles the life of Quaninch, a mixed-blood boy born in 1829 to a Paiute mother and Scottish frontiersman and fiddler. Shortly after Quaninch's birth, his father leaves for California to bring back horses but never returns. Quaninch's journey continues through his capture by slave traders, his conscription into the Mexican Army as the Mexican/American War of 1846 erupts, his escape, love, sorrows, journey across the ocean and triumphant return to his Paiute people. In Birth and Tribal Life the CD begins with a chord that recalls a blowing wind. A bright, excellently played piece that covers both the traditional flute and violin, covering material that contains elements of the connection between the Irish and the Native communities. These are the thematic references to the Celtic connection that he will mention in more detail later in the piece. In track two, Slavery and Conscription we see that the titles to these pieces are more than just words. They are a concise portrayal of the actual events and the music follows from them taking the listener on a journey that all people can follow. In the documentary We Shall Remain, Carter Camp says, 'There is a time in every tribes history of absolute horror. Absolute horror. If you go back to the beginning for some of the eastern tribes that was 500 years ago. Ours (Lakota and Wounded Knee) was in the 1890s and we haven't forgotten.' In the track Music - The Common Ground the Kalimba backs a flute with a string arrangement. Not synthesizer, actual strings. Trap set drums, bass and other percussion set this one apart. NO matter who invents something, who establishes the tradition, it will all always fit if you perceive it to fit. I perceive that there are no real distinctions or separations but the school of thought that comes from the western European scientific notion that everything needs to be categorized in order for all to understand is false. What matters is the spirituality of it all. The composition Celtic Connection reminds me I have always enjoyed the connection with our Celtic brothers. Anyone with the first name Jamison better love his Celtic background or he'll end up battling his way out of the bar. It starts with a solid vocal intro featuring the violin next to it over something that sounds like a traditional Scottish or Irish folk tune. The song The Journey Home compels me to ask why would someone risk the dangers of an ocean and an entire continent to get back to the land of their birth? This is the point. It is about what we know and love and the bond that exists between the blood and the land. It is in the drum and the human voice. I hear it. I feel it. It can never be any different. It is the history of that place and the dust of my ancestors that make this land what it is for me. It's impossible for me to see it any other way. That's why when you get to this piece it summarizes everything about the composer's notions about identity and connection. We do have common ground in every sense of the word. It only becomes difficult when we don't share that with others. Ending again with the way it started and the song of the wind, drum and rattle with the drone of existence going on. Although Mr. Bird falls short on the balance that an educated listener wants to hear, (My brilliant and talented musical consultant, Steve K. aka tep, states most emphatically that, 'the symphony is an afterthought and the traditional elements of the piece dominate.'), personally I never would have noticed if he hadn't pointed that out. Personally, I know what the journey home is all about. It's about the hot shower at the end of the ride. The thing that dominates my thoughts as I finish up my ride is thinking there is a noticeable lack of any vibrato in the violin technique being presented. Is that an intellectual position taken by Mr. Bird to portray the difference in the two traditions? It is, in a way, a rejection of the western tradition inasmuch as that can be understood coming from the place he comes from and we all as Native Americans know where home is as I pick up my pace headed for that place where my space is kept and the writing gets done. ' Jamison Mahto -- Indigenous in the News - Native American Times - September 2009.

Here's what you say about
Asaf Finkel - Tribal Music Suite.