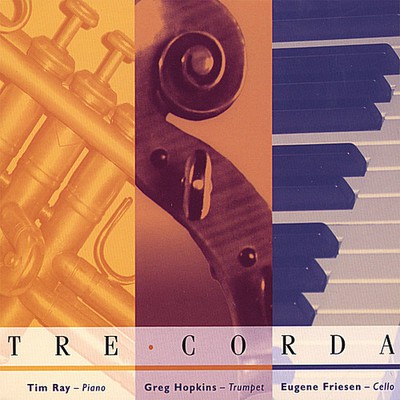 Whether reinventing jazz standards, breathing fresh life into classical repertoire, or premiering their own original works, Tre Corda generates a compelling sound all it's own. Hailing from ensembles as diverse as Lyle Lovett's Large Band, The Paul Winter Consort and the Boston Pops, these three incredible musicians and composers blend composition and improvisation in new and unexpected ways, using the vocabulary of classical composers like Bartok and Stravinsky, as well as songs and ideas from the worlds of jazz and popular musics. Cellist Eugene Friesen's dynamic rhythms and incredible array of bowing and plucking techniques, trumpeter Greg Hopkins's virtuosic leaps and outrageous genre-bending phrases, and pianist Tim Ray's lyric melodicism and two-fisted pyrotechnics - these are just a few of the ways Tre Corda's music has satisfied and delighted audiences with both jazz and classical expectations. "Tre Corda consists of pianist Tim Ray, cellist Eugene Friesen and trumpet/flugelhorn player Greg Hopkins. On their self-titled CD on Agitated Cat Music, the trio explores the freer aspects of the jazz tradition. These accomplished musicians infuse the disc with elements of classical and world-beat music to give the tunes a very open, spatial sound. Highlights include the "Shorter Suite," a series of improvised variations on melodies by Wayne Shorter, and a wild version of Rogers and Hart's "Blue Moon," as well as several distinctive originals. A fine example of music without borders." - Alan Chase, The Wire (NH) "Tre Corda - what a marvelous recording. WOW! I thoroughly enjoy the beautiful writing and the great performance by all three of you. BRAVO!" - Rufus Reid, legendary jazz bassist and educator GROUP BIOS: Tim Ray - piano Perhaps best known as long-time pianist for Lyle Lovett, Tim Ray's wide-ranging skills as a soloist and accompanist have afforded him the opportunity to perform with legendary performers from all walks of music. Appearing on over 70 recordings to date, Tim has performed in concert with an extensive list of pop music icons, notably Aretha Franklin, Bonnie Raitt, Willie Nelson, Jane Siberry and Soul Asylum. He regularly performs with leading figures in the jazz world, among them Gary Burton, Esperanza Spalding, Scott Hamilton, Dave Douglas, Brian Blade, Lewis Nash and Rufus Reid. Tim's busy schedule has included frequent tours throughout the Americas, Canada, Mexico, Europe, Asia, and the Middle East, and has included performances at Carnegie Hall, the White House, the Kennedy Center and the 1992 Presidential Inauguration. He is a grant recipient from the National Endowment for the Arts, and is currently on the faculty of the Berklee College of Music. (AgitatedCatMusic.com) Eugene Friesen - cello A graduate of the Yale School of Music where he studied with Brazilian cellist Aldo Parisot, Eugene Friesen is active internationally as a concert artist, composer, conductor and teacher. In 1995, 2005 and 2006 Eugene won Grammy Awards for musical contributions to three Paul Winter Consort albums, "Spanish Angel," "Silver Solstice," and 'Crestone.' He has worked and recorded with such diverse artists as Dave Brubeck, Toots Thielemans, Betty Buckley, Will Ackerman, Joe Lovano and Dream Theater. Recording credits include six albums of original music: "New Friend", "Arms Around You", "The Song of Rivers", "In the Shade of Angels", "Sono Miho" and "Colorful Transitions". Eugene is an artist-in-residence at the Cathedral of St. John the Divine in New York City, and on the faculty of the Berklee College of Music in Boston. (Celloman.com) Greg Hopkins - trumpet Performer, composer, and arranger Greg Hopkins first picked up the trumpet as a boy in Detroit, and to this day it would be hard to spot him without his horn. That symbiosis of man and musical instrument is evident throughout Greg's career, which began in 1965 freelancing in the Detroit area for such acts as the Temptations, Marvin Gaye, and Gladys Knight. Greg made a name for himself recording and touring for several years as soloist and arranger for the Buddy Rich Orchestra (he was called "a real find" by the London Times in 1974), but he has also performed with Dizzy Gillespie, Ella Fitzgerald, Frank Sinatra, Stevie Wonder, Joe Williams and Tony Bennett. A Professor of Jazz Composition at Berklee College of Music, Greg has developed and teaches several courses in composition and also directs the prestigious Berklee Concert Jazz Orchestra. (GregHopkins.net)

Here's what you say about
Tim Ray - Tre Corda.