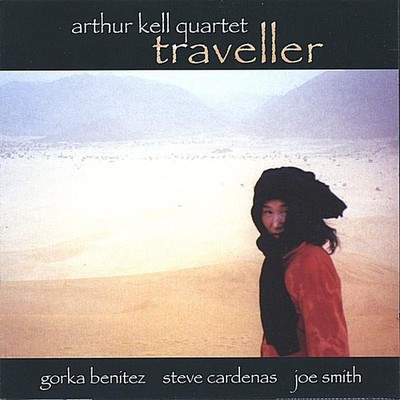 The Arthur Kell Quartet is a dynamic mix of talented musicians from New York and Spain exploring a compelling, original jazz music. Their upcoming 2005 release on the Fresh Sound New Talent label unveils a new program of songs that have been enthusiastically embraced before sold-out audiences in Spain and New York. Arthur Kell has emerged as one of the most original voices on today's New York jazz scene. His compositions - designed with strong melodies and open structures - keep the focus on group interaction and the impulse of the soloists. The quartet features the brilliant guitar work of Steve Cardenas - constantly in demand in New York - and saxophonist/flutist Gorka Benitez, considered to be one of Spain's most personal and expressive jazz artists. Bio Arthur Kell (bassist, composer) - For the past twenty years, he has played with an amazing cross-section of the most influential contemporary jazz musicians in New York City and around the world. For example, in the 1980's Arthur played extensively with artists such as Thomas Chapin, Bobbie Previte and Marc Ribot, and also played numerous dates with Billy Bang and Mark Feldman. This wide experience and versatility are reflected in Arthur's playing and writing. His compositions and his improvisations draw on many diverse influences, which makes for very entertaining and compelling listening. Arthur's ability to fit seamlessly into any musical context has made him much in demand as a sideman. Recently, he has been working with the likes of Sam Newsome, Armen Donelian, Dave Berkman, Cliff Korman, Guillermo Klein, Christian Howes, John Stetch, Bruce Barth and the Finnish singer, Sanni Orasmaa. He was paired with Bernard Purdie on a 2000 recording by Peggy Stern (Koch Int'l) and with Matt Wilson on a 2003 recording by guitarist Andy Green that was produced by John McNeil. Since 1997, he has led groups featuring such contemporary jazz stars as Bill McHenry, Steve Cardenas, Matt Wilson, Gerald Cleaver, Donny McCaslin and Chris Cheek, and his first CD, See You in Zanzibar, features McHenry, Cardenas and drummer Allison Miller, each of whom are on the cutting edge of creative music in New York City. Album Notes: Composing music is often unpredictable. It can come quickly or only eventually, from nowhere or from a particular inspiration. And sometimes, when grown up, a composition may just faintly resemble the original idea. I Believe Ya' got started one night when Peggy Stern and I were playing 'Bolivia' at Sofia's on 47th Street. As we got deeper into the tune during an extended ending, I evolved the bass figure that became the foundation for I Believe Ya'. The melody flowed right out of it a couple of days later. Djailo Feast: When I arrived in Kyrgyzstan to visit my friend Nurlanbek a few years back, he whisked me off to the mountains in a beat-up Muscovitch. The car hit a huge rock in the fields and landed on top of it, but somehow it survived and we arrived safely at the camp in the high summer pasture (djailo). They turn mare's milk to beer there and never let your glass empty. It was a complete surprise when we were called out of the yurt to pray for a lamb before a feast in my honor. Local elders turned up and, in tradition as guest, I was offered all the special parts. Ijinna was untitled for a while until I realized that it seems to have much of the feeling of when I had a chance to revisit Niger -- where a big chunk of my heart resides. It had been ten years since I'd seen my guide, Abba Kéllé Dizi. On my first visit, we'd spent two months crossing east to Chad, sleeping out side-by-side in the Saharan winter. I long to follow that path even further to the east. In'shallah! This time, in mid-summer, he took us to the mountain-like dunes at Arakou. Sitting at the top we were caught in a sudden rain, ran down and found ourselves dancing in celebration - ijinna is the Tamachek name for a summer rain. Crinkum Crankum means full of twists and turns (you can look it up), and so is this melody. A Hand For Santiago was inspired by Paulo Coelho's book 'The Alchemist'. The main character, Santiago, can only save his life and his life's journey by becoming the wind. Divine assistance helps him realize that miracles in the world are found in one's own soul. Hermeto was written quickly, late at night, originally conceived as a slow ballad. My friend, pianist/composer Russ Lossing, took one look at it and instantly heard uptempo Brazilian. He was so right! A tribute to the great Hermeto Pascal. Mary Louise Musser Kell, my mother, passed away, very, very gently, while this project was in production. For her, with great affection. Can Festis is a centuries-old home/castle/inn in the Catalan countryside in Spain with a great energy. The days the band played and stayed there were like waking dreams, as if we had all grown up there. Lucy's Back: Lucy lived on the top floor of my building in Brooklyn since before I was born. Before she passed away in 2003, she regularly complained of 'spirits fooling with her apartment.' Later, the new tenant's neglected cats kept appearing mysteriously in the hallway and scratching at my door, until I realized that the deadbolt on the door was opening by itself when she wasn't home. A new cylinder and keys didn't help, but finally a new deadbolt held fast. Yet, I couldn't help wondering about Lucy.

Here's what you say about
Arthur Kell - Traveller.