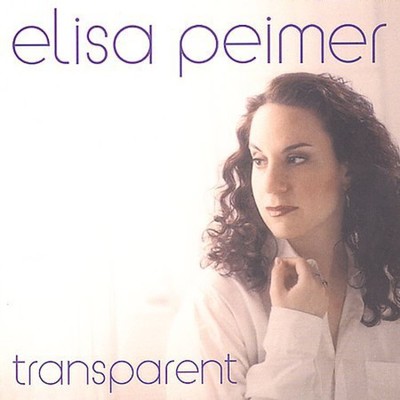 Never one to mince words, singer/songwriter Elisa Peimer has cultivated a rare talent of weaving interpretations of personal experience with alluring pop melodies, flavored with a unique dose of rock, country and folk. With a voice that moves effortlessly between a shout and a whisper, Elisa expresses a surprising tone of idealism, self-discovery and empowerment in songs that are a celebration of the universal human experience. Her addictive songs have been called 'truly gorgeous' by Billboard Magazine and 'impressive' by CMJ. Elisa and her band have just released their third studio album, 'Transparent,' as a follow-up to their critically received CD, 'Shed This Skin,' and their initial effort, 'EP.' 'Transparent' was co-produced with John Kurgan, whose credits include work with Sting, Stanley Clarke and Stuart Copeland, as well as production duties with Neil Dorfsman (Sting, Dire Straits, Paul McCartney). It's a unique enhanced CD release - it contains a full-length video of Elisa's song, 'Turning Circles,' as well as a web link directly to Elisa's web page. Elisa's songs have garnered national press and radio airplay across the country, including one of the top radio stations in New York City - The Scott And Todd Show on WPLJ. Elisa's music has had a wide range of exposure - independent films ('Voices of Inspiration' airing on UPN in New York City and indie film 'Babydoll' Forever), charitable compilations ('It's About Eve' benefit for breast cancer research and 'We'll Carry On' benefit for September 11 charities) and nationally distributed music samplers (Step Magazine sampler and Oasis radio sampler). They have opened for KC and the Sunshine Band, and their moving, intimate performances have earned them a steady local following at New York City clubs including Mercury Lounge, Fez, Arlene Grocery, and CB's Gallery. With each performance, she gains new fans while continuing to enchant her loyal audience. Elisa's music has made quite an impact on the online world as well. She is featured on several popular online music sites, including mp3.com (where she was voted 'Song of the Week' on Women of mp3.com), and LoudEnergy.com (where she's in the Top 20 Pop downloads). Elisa was also featured as an 'Unsigned Beauty' on iVillage.com, the top women's website in the country. Her album, 'Shed This Skin,' was voted one of the Top 25 albums of the year by INDIEcator.com. Elisa was a recipient for the past four years of an ASCAP Popular Award and is an approved member of the national independent women's music collective, Indiegrrl. She also has licensing deals with Columbia Tri-Star Television, the Oxygen Network, Muzak and MTV. 'Beyond the difficulties we face in life,' says Elisa, 'there's an undercurrent of joy that, to me, is best expressed through music.' Judging from the buzz that is growing around this new artist, that philosophy has obviously touched a nerve. Elisa Peimer is one artist on her way to becoming a household name.

Here's what you say about
Elisa Peimer - Transparent.