Kito Peters - Too Much Light 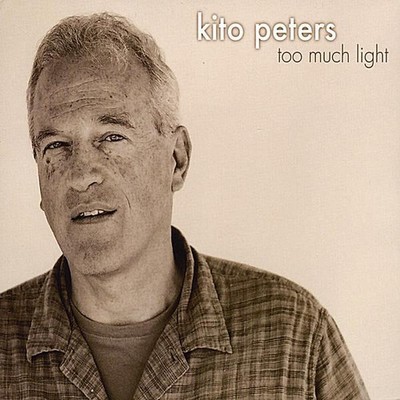 1) What's your background? I grew up in New York City, the eldest of four brothers. Parental divorce when I was eleven turned everything upside down. Still soldiered on through high school as a would-be hero who planned to become president one day. Then off to college in 1968. Revolution on campus. Revolution in my psyche. All my ideas about the world and my place in it exploded. Blasted inwards to try to reconstitute myself . Years in the wilderness. I'd fallen in love in high school with a songwriter. Who knew actual humans could write songs? I bought a guitar age 19. Didn't write my first tune til I was 25. Then wrote a lot of them for several years. And stopped. Influenced by a seminal guru-type figure in the early 80s to go to grad school in clinical psychology. Earned a PhD and became a therapist, teacher, group leader. Started writing songs again in a big way in the late 90s. Was asking this question: what would you be bartering for more time to do if this were your last day on earth. Surprised by the answer - make more music. Moved to New Mexico in 1998 when my daughter left for college. Was drawn to the sky and mountains and expanse. Started recording soon thereafter.... 2) How do you write your songs? I'll get a little snip of an idea. One could come from anywhere at any time. Feels like they choose me more than vice versa. Often a lyrical phrase will get me rolling, though sometimes it's a chord sequence. And then I'll fiddle around til I like what I have. Always write words and music together, and once I start I almost always finish (usually over the course of several intensive days). Then I keep sanding til nothing bugs me when I play the thing. Usually if I know what I\'m going to say beforehand, I lose interest in the lyric. Instead, I like contradiction (you could even call it dialectic) between the verses, especially when I can surprise myself. 3) How do you choose which songs to record? I'm lucky to have a great group of collaborators. I've worked with several different producers. First I send them a disc with a lot of songs on it - way more than we could ever record. Then they tell me which ones they like best and feel drawn to develop. Since I'm a questionable judge of my own material, I rely a lot on the seemingly more objective reactions of my producers. They don't care what the song means to me. They just know if they're drawn to the vibe. Then when we get together to rehearse the tunes, each player adds his (usually) unique feel to the dialogue, and the song takes shape in that synergy. 4) Whom do you imagine as your audience? Well, I feel very much a boomer. Still influenced most by the music and lyrics of that era. We go for a more modern soundscape frequently, but the roots reach back. Let's see. People who appreciate intense, poetic lyrics might like my stuff. I write quite a few political tunes (very hard to do without preaching). I'm, to say the least, horrifed and angered by what's happening these days. So anyone who's opposed to current trends might enjoy my songs. I also write about my own relationship travails. A lot of people can relate to that. Many songs in which I take my own internal inventory. Shadow songs. Recently I notice I'm writing for the first time about getting older. Since we employ a variety of genres, like pop, folk, jazz, rock, country, and world, anyone who enjoys diversity in approach could go for our records. And, of course, since often people are drawn to songs for the vibe and rhythm and melody regardless of lyrics, in a way it's hard to tell who might enjoy what. 5) Say a little about your new CD, \'Too Much Light.\' I like the relative simplicity of it. Still a lot of musical elements but less of an auteur approach to production than on some of my other records. Closer to the way I initially wrote the songs. Michael Grimes (the producer) and my initial idea was to mingle our version of 70\'s LA jazz with a windswept desert vibe. Then we added some other touches, but the core remained essentially that. Sax and trombone and pedal steel. I think that for once we kept pretty close to the original idea.

Here's what you say about
Kito Peters - Too Much Light.