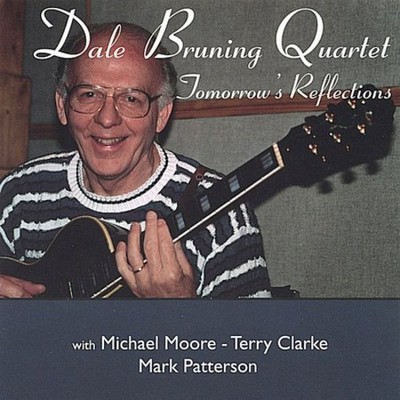 JazzTimes - October, 1997 'Frequently comping and soloing sparsley ala Jim Hall, Bruning rarely plays a chord or note that's unnecessary.' Just Jazz Guitar - February, 1997 'Dale Bruning is one of America's unsung guitar heroes. ... Dale manages to coax beautiful sounds from his handmade Stevens guitar...' Lincoln Journal Star - February, 1996 'Tomorrow's Reflections is Bruning's first recording as a leader and it is long overdue. Alternately contemplative and breezy...' Dale Bruning Bio guitar A native of Carbondale, Pennsylvania, Dale Bruning has been playing professionally since the age of 14. In the 1950s and early '60s, he worked in the east with such people as Specs Wright, Larry McKenna, Carol Sloane, Billy Bean, and Art Van Damme. A move to Denver, Colorado in 1964 has kept him there to the present. He has worked with Red Norvo, Jim Hall, Erroll Garner, Dizzy Gillespie, Marian McPartland, Michael Moore, Terry Clarke, Mark Patterson, Ken Peplowski, Dave McKenna, John Allred, Chet Baker, Jake Hanna, Gus Johnson, Bill Frisell, Ron Miles, Eric Gunnison, Mark Simon, Paul Romaine, Rich Chiaraluce, Richard Grossman, Bruno Carr and Ron Washington. Mr. Bruning has authored The Dale Bruning Jazz Guitar Series: Volume I - Phrasing & Articulation and his second and third volumes are scheduled to be released in late 2003 or early 2004 through JLE Publishing Company. He is one of the most significant players and educators in the history of the guitar. Bill Evans once stated that the purpose of music is to enrich. Dale Bruning has taken this to heart. His playing demonstrates the sensitivity and brillance long associated with those musicians who are more interested in making the best music, rather than making themselves look the 'best.' Consequently, and by that definition, he truly is one of the best musicians in the world today.