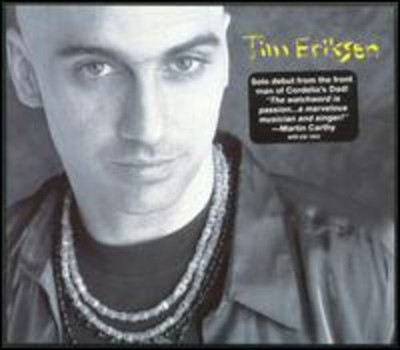 Tim's self-titled, all-acoustic solo CD draws material and inspiration from the Anne and Frank Warner collection of American folk songs, the early American hymnody of the Sacred Harp, and a host of other historical and personal resources. This collection of songs about love and death, joy, despair, redemption and, ultimately, hope confirms his prowess as a stunningly intense vocalist, versatile multi-instrumentalist (guitar, fiddle and banjo), and true believer in the timeless spirit of American music. The CD was recorded in one five-hour session using no overdubs, providing an undiluted dose of Eriksen's passionate voice, instrumental skills and deep respect for musical tradition. Eriksen's star is currently ascending with his role as arranger and vocalist in the Christmas 2003 blockbuster historical film, 'Cold Mountain,' which is bringing his love of 'shape note' singing to a new and receptive audience of critics and music fans. Bio: After years of making 'uncommercial' music as a punk-rocker, as leader of various bands performing classic and forgotten American ballads, 'shape note' singing and traditional Bosnian music, and as a solo singer/songwriter/multi-instrumentalist, Tim Eriksen is an improbable but potential candidate for popular recognition as The Next Big Thing. His profile has risen with the Christmas 2003 release of the movie 'Cold Mountain,' on which he served as a musical consultant, arranger and vocalist and bonded with the film's musical producer, T Bone Burnett, whose production of the 'O Brother, Where Are Thou?' film's Grammy-winning, multi-million-selling soundtrack CD made bluegrass and oldtime music viable commodities. Eriksen and Burnett are currently continuing their musical relationship via an album of Sacred Harp recordings, a track for the Coen Brothers' remake of the British film, 'The Ladykillers,' and are considering collaborating on a second Eriksen CD. Meanwhile, a song by Cordelia's Dad, one of Tim's many bands, from their Spine CD on Appleseed is slated for inclusion in 'Crystal,' an upcoming film starring Billy Bob Thornton. Raised in Massachusetts, Tim started researching and singing traditional American music in high school while performing in hardcore punk and garage bands. His interest in world music was fanned by his studies at Amherst College, where he played in Javanese and Sudanese gamelan ensembles and learned to play the vina, a stringed Indian instrument. He also started performing 'shape note' singing, a style based on the 1844 'Sacred Harp' hymnal, and formed the punkish 'folk noise' band Cordelia's Dad. Post-graduation, Tim traveled to India on a fellowship, studying and performing Carnatic (classical Indian) music with the renowned K.S. Subramanian; back home, Cordelia's Dad dissolved (for a while). In 1989, Tim was introduced (through a bootleg cassette) to the field recordings of traditional American music collected along the Eastern Seaboard by amateur folklorists Frank and Anne Warner between 1940 and 1966. These songs, including 'Tom Dooley,' 'Days of '49,' and 'Whiskey in the Jar,' first entered the popular lexicon through performances by Frank Warner and have subsequently been recorded by such diverse artists as Bob Dylan, Mahalia Jackson, Metallica, and the reconvened Cordelia's Dad. Eriksen was a prominent force in the first commercial release of the Warner recordings (as 'Her Bright Smile Haunts Me Still' and 'Nothing Seems Better to Me'). Eriksen continued his involvement with shape note singing in the Northampton Harmony group and simultaneously formed Zabe i Babe, a group specializing in Bosnian traditional and popular music. In 1993, both Cordelia's Dad and Northampton Harmony toured Europe (separately). More touring and recording with all three groups followed, and Tim also performed with Cordelia's electric spin-off, Io, and the Rehoboth Oromo Choir. 2000 was another busy year for Eriksen, who divided his time between conducting research in Bosnia, instigating the CD releases of the Warner collection, chairing the national Young People's Sacred Harp Singing convention, teaching at Dartmouth, and touring with his various groups. The following year, Tim's self-titled debut CD, recorded 'live' by Tim alone on vocals, guitar, fiddle and banjo with no overdubs during a six-hour studio session, was released to critical raves for his powerful vocals, stark arrangements and stunning mixture of traditional and original songs. In 2002, Tim traveled to Romania as a musical advisor for the 'Cold Mountain' film, which utilizes his 'shape note' expertise and his vocals as actor Brendan Gleason's singing voice, toured England, and taught music courses at the University of Minnesota. Cordelia's Dad also released their first CD in five years. Tim has spent the past year finishing his 'Cold Mountain' work, teaching at Sacred Harp schools and workshops, recording an album of Oromo music, co-producing a Sacred Harp album recorded during the 'Cold Mountain' filming for release on the DMZ label co-founded by T Bone Burnett and movie directors Joel and Ethan Coen, and starting work on his next solo CD, which may also involve Burnett.

Here's what you say about
Tim Ericksen - Tim Eriksen.