Amy Rigby - Til the Wheels Fall Off 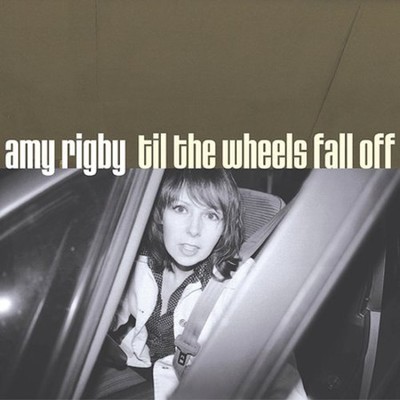 Amy Rigby has been compared to everyone from Elvis Costello to Carole King, but she 'has no peer on the current pop scene,' according to the Chicago Reader. Rigby will release her fourth solo album in April 2003, her first on the Signature Sounds label. Til The Wheels Fall Off was recorded in Nashville, New York and Glasgow and co-produced by Amy with Richard Barone, George Bradfute (Jason Ringenberg), Bill Lloyd (Foster & Lloyd), Steve Allen and David Scott of The Pearlfishers. It features 14 original songs of hope, humor, cynicism and survival, played with spirit and style by Rigby and a supportive cast of musicians including Duane Jarvis (Lucinda Williams), Rick Plant (Buddy & Julie Miller), Steve Goulding (Mekons), Dave Jacques and Paul Griffith (John Prine). Todd Snider duets wtih Amy on the title song. Born in Pittsburgh and a long-time resident of New York City, Amy was songwriter, singer and rhythm guitarist for cowpunk pioneers Last Roundup and folk pop trio The Shams before her first solo album Diary Of A Mod Housewife (1996) got the attention of critics and music fans. Produced by Cars guitarist Elliot Easton and featuring Don Heffington (Lone Justice), Greg Leisz (Joni Mitchell) and Yo La Tengo's Ira Kaplan, it combined reality-based lyrics and transcendent melodies with a passionate music fan's collection of pop, rock and country influences. Mod Housewife showed up on many of the year's top ten lists and even in a few women's studies courses, and Amy was profiled on All Things Considered, CNN, Fresh Air, and MSNBC. SPIN magazine dubbed her 'Songwriter Of The Year' and the album was voted #8 in the 1997 Village Voice Pazz & Jop critics' poll. Rigby's second album Middlescence was another critical success and led to tours with Warren Zevon, Bob Mould and Billy Bragg as well as a spot on the 1998 Lilith Fair. Also produced by Easton and engineered by Mark Linett (Randy Newman, Beach Boys), it contained even bolder songs about relationships, shopping, drummers, growing up and growing older, and received Honorable Mention in the Association for Independent Music's 1999 Indie Awards, rock category. In addition to playing bars and the occasional living room, Amy was keynote speaker at the International Association for the Study of Popular Music's 1999 academic conference at Middle Tennessee State University, organized and moderated a 'Rock Parenting 101' panel at South by Southwest, and spoke and performed at the Southern Festival of Books. Amy's subsequent move to Nashville contributed to the clarity and broader perspective of The Sugar Tree (2000). Produced by Brad Jones (Jill Sobule, Steve Forbert) with help from some of the town's finest pop and country players including Will Kimbrough, Ken Coomer and Joy Lynn White, The Sugar Tree received outstanding reviews in regional and national press, and Rigby performed on Late Night with Conan O'Brien, Mountain Stage's syndicated radio and television programs, and toured solo and as support act for Richard Shindell and Todd Snider. She successfully toured the UK, was a panelist and performer at the 2000 Rockrgrl convention in Seattle, and was selected as a featured composer for the Donne in Musica: ControCanto festival in Rome (2001). In 2002, Koch Records released 18 Again, an anthology compiling songs from Rigby's three solo albums, as well as everyone's favorite revenge song 'Keep It To Yourself.' 18 Again was one of rollingstone.com's critics' picks for Reissue Of The Year, and No Depression praised it for 'dazzling wall-to-wall songcraft.' Several songs from this collection have recently been covered by other artists, including Laura Cantrell ('Don't Break The Heart'), Ronnie Spector ('All I Want') and Maria Doyle Kennedy ('Keep It To Yourself'). Amy Rigby continues to write and sing from the trenches of rock, romance and reality. Til The Wheels Fall Off may be her clearest missive yet.

Here's what you say about
Amy Rigby - Til the Wheels Fall Off.