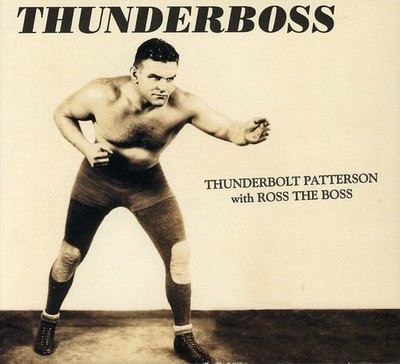 J.P."Thunderbolt" Patterson may be best known as the longtime drummer for NYC punk legends, The Dictators and a founding member of "Handsome" Dick Manitoba's Dictators spinoff group, Manitoba's Wild Kingdom. In addition to 16 years of recording and touring with the Dictators, J.P.'s career has also included five years spent with indie rock faves The Voluptuous Horror of KarenBlack, as well as performing and/or recording with Joey Ramone, Dee Dee Ramone, Patti Rothberg, Lemmy, Rhys Chatham, Timmy Cappello and so many more. J.P. now endorses Pearl Drums, Remo Heads, Vic Firth Sticks and ESP Guitars. In 2004, Patterson reunited with fellow Dictators Manitoba, Andy Shernoff, Ross the Boss and Scott Kempner for Little Steven's Underground Garagefest. Playing alongside The New York Dolls and The Stooges, J.P. and his cohorts were credited for being the highlight of the show! For most of his life, J.P. has also been a member of the Screen Actors Guild. He has appeared in literally hundreds of movies and television shows. On camera, he's played roles that have taken him from being Val Kilmer's waiter to being an engineer for Lindsey Lohan and Jennifer Lopez. Off camera he's done everything up to and including being cast as David Lee Roth's stand in! Although J.P. is a longtime resident of New York, the city that made him famous, he spent his formative years growing up in Afghanistan. The son of an American diplomat, J.P. was well traveled at an early age and has lived in such exotic places as Zambia and Rwanda. Perhaps it is some of those early multi-cultural influences that add an exciting flavor to his solo work and help Thunderboss soar above rehashed rock mediocrity. Thunderboss is J.P's debut solo effort. He wrote, arranged and produced the 11 song record that can be called a soundtrack to life. Accompanied by Ross the Boss, founding member of the Dictators and metal legends Manowar, on lead guitar, J.P. played most of the other instruments himself, calling on engineer C.J. Scioscia to provide some finishing touches and textures. Cruising in and out between surf-punk, arena rock and world fusion, Thunderboss captures the imagination and takes the listener on an adventure that is every bit as exciting as J.P's real life. Available now from Poptown Records, Thunderboss is an expression of decadence and a declaration of independence from homogenized corporate playlists. Live outside the box! Be bold! Get Thunderboss!

Here's what you say about
Thunderbolt Patterson - Thunderboss.