Frank Royster - Thru the Years 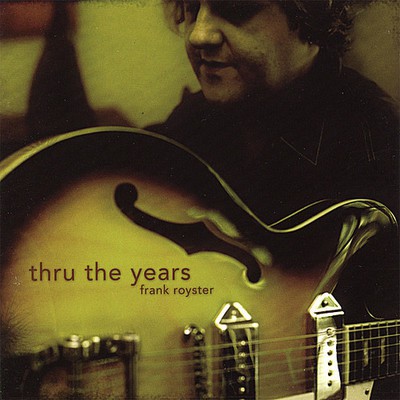 You may not know who Frank Royster is, but many of you have heard him before. He added guitars to the first (most excellent) Fire Apes CD - 'A Pefect Day For Bananafish' and was a member of the band from 1996-1998! He's been a vet of the Charleston, SC music scene for close to 20 years. The songs contained here were recorded and written over a period of about 12 years. The album was co-produced by Frank and Paolo Liccairdi, who has played drums on all of the Fire Apes releases to date. He also co-produced The Apes' 'Central Park Carousel'. Very influenced by the Beatles, Elvis Costello, Beach Boys, Marshall Crenshaw, and The Smithereens. In other words, a group of pop hook-meisters that we all love! In fact Jim Babjak of the Smithereens plays guitar on the track 'Pressure'. Vocally, Frank's a cross between Elvis Costello (witness 'Say Goodbye' that sounds like it came off 'My Aim Is True'!) and Pat DiNizio! As soon as you here his powerful wall-of-guitars sound, it just screams Smithereens. The production has sort of a DIY charm that recalls the first Van Duren, Marshall Crenshaw, and Smithereens records! Very, very catchy! 'A smart mix of garage-rock riffs, arpeggiated rhythm guitar work, raspy double harmonies, and punchy drum beats, this album embraces the basics of classic 'power pop' and explores the melodic possibilities. Things are upbeat and romantic with a tough melancholy and the tunes tap along with medium tempo and a singalong vibe. Stepping out of the shadows a bit as a guy who ain't afraid to sing about being taken by a smile, pleading to talk a little while, and professing his true love, Royster moves away from the heavy guitar sound of his bar-rock cover band The He'd Shop Boys toward more heartfelt stuff on the 10-song collection that keeps a genuine rock 'n' roll vibe throughout. The Lennon/McCartney team would approve of lead-off single 'I'm So Glad' and 'Say Goodbye.' The Brothers Davies would approve of the hand-clapping grooves and lilting minor-key chord changes (in the chorus, of course) in power-pop nuggets 'Isabella' and 'Kristina.'' -Charleston City Paper.

Here's what you say about
Frank Royster - Thru the Years.