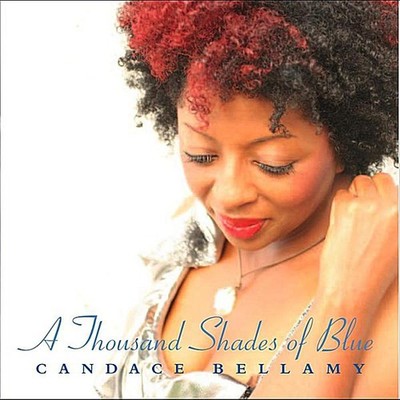 A Thousand Shades of Blue is Candace Bellamy's first original EP. Since moving to Austin from Tennessee five years ago, Candace's life has taken numerous fascinating turns. A successful physician who works for the military and a men's maximum security prison, she first pursued singing nine years ago as a hobby. After taking voice lessons, she began performing in community theatre productions in Tennessee and then formed a rock and blues band. Candace decided to move to Austin to get more involved in music. She sang in multiple R&B bands, appeared in the critically acclaimed "Porgy and Bess" at Zach Scott Theatre and was a worship leader at Gateway Church when she was approached to perform a musical showcase at the Waldorf in New York City. There she met Kevin Spirtas, an actor on the popular daytime television drama "Days of Our Lives," who told her about his one-man show in which he told stories about his acting experiences. This inspired Candace to develop her own one woman show, "Follow the Red Lips", which she also performed in New York City. Having multiple musical experiences under her belt, Candace returned to school to complete a one-year music program at the University of Texas, while continuing her day job. During this time she met Ruth Carter, an amazing songwriter who has written for multiple artists including Stevie Ray Vaughn, Brian Setzer and Robert Palmer. Her collaboration with Ruth resulted in the songs on the CD. Candace and Ruth also collaborated with Jimi Calhoun a bass playing legend who has graced the stage with Dr. John, Jimi Hendrix, John Lennon, Wilson Pickett, Sly Stone (and the list goes on). Some of Austin's elite play on Candace's first original EP including Denny Freeman on guitar, Jimi Calhoun on bass, Frosty Smith on drums, Mike Thompson (Eagles) on keyboards, and Bill Carter on acoustic guitar. Also included is a song cowritten by JJ Plasencio (Sixpence None the Richer) and featuring his beautiful cello playing.

Here's what you say about
Candace Bellamy - Thousand Shades of Blue.