Adam Snyder - This Town Will Get It's Due 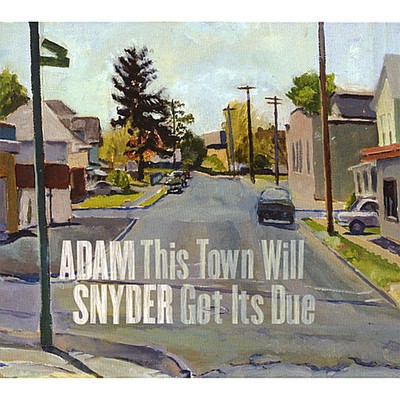 It was the summer of 2003 and the power had gone out for the third time that season. Adam Snyder had been in Europe the last couple of years, promoting his first solo album. Now he was back in Kingston and his hometown was, literally, dark. Walking the eerily quiet streets at night, Adam could almost imagine it was 100 years earlier. Up from the waterfront through the twisted alleyways, the old moonlit buildings and busted up sidewalks seemed to echo with the voices of those who had come and gone long before. These ghostly sensations would follow Adam back up the hill to his own, darkened, 19th century house, where he'd light a candle and pick up his guitar. Eventually the problem was sorted out and the neighborhood blackouts became less frequent, but the spirit of those dark, nocturnal rambles remained, and This Town Will Get It's Due was born. Adam moved with his family up to Kingston from New York City in the early 70s when he was a boy. He'd spent his youth wandering the streets which are famed for their colonial houses but which, for many years, maintained the spirit of other time periods as well. The Great Depression, for instance, had hit the old industrial city particularly hard. Like a lot of people, Adam cut out of his hometown the first chance he got and spent the rest of his teens and twenties living all over the place. From New York City to London, from Seattle to the midwest, Adam played music constantly, both on his own and in bands, but it still hadn't quite occurred to him that this would be his profession. Then in the mid 90s, through some strange twist of fate, an indie band called Mercury Rev found their way from Buffalo to Kingston. Adam, home visiting his family, found himself connecting with them. Before he knew it, he had joined the band and was touring the world. The band was in a period of transformation and Adam found himself a key player in the recording of a new kind of album for Mercury Rev called Deserters' Songs. At first the album did not seem like it would find a place in the musical landscape of the time, the band braced for bad reviews. What happened surprised everyone. The album quickly went gold abroad and the band suddenly found themselves achieving success, as well as pop star status overseas. Some thought him impulsive, but after 5 years Adam decided he wanted to try something different. All along he had continued to write narrative songs based on his own life experiences, songs sung plainly with not much back-up other than his own guitar. In 2000 he came to Mike Scott's attention and was asked to open up for the Waterboys on an extensive tour throughtout Europe. In 2001, he signed to David Gray's HTI label out of the UK and spent that summer in London, writing new arrangements and recording Across The Pond. Across The Pond was an immediate critical success overseas and it's first single, Two Moons, was scooped up by the BBC and found it's way to the top 40 in the UK. Adam continued to tour abroad for some time, particularly around Ireland and the UK. One irony of having signed to a UK label was that the attention Adam enjoyed as a distinctly American artist overseas was something that didn't quite make it back to his native country. This Town Will Get It's Due is not an album that shys away from tackling difficult issues or dark emotions. But it is also an album with love songs and one that is incredibly hopeful for the future. The predominant story is that of a small city trying to find it's place in 21st century America. Adam readily admits that the town's story and his own story do seem to have a few things in common.

Here's what you say about
Adam Snyder - This Town Will Get It's Due.