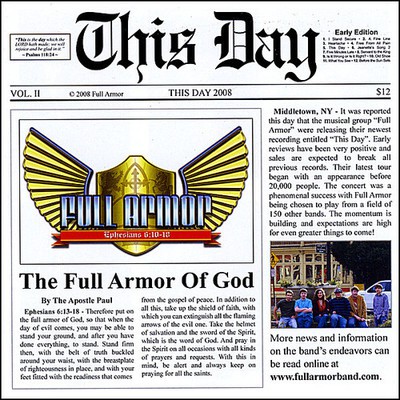 Full Armor lives up to it's name. They look pretty much like any other group of kids in a band. They live and breathe their music. They sing of love and angst. But this band is different-the love and angst they sing of doesn't mimic that of their peers. No, this is a Christian band, Full Armor, and the six young people who make up this band are spreading their love of God and belief in a positive world through their music. Just over two years ago, Father Jim Hess, associate pastor at Mt. Carmel Roman Catholic Church in Middletown, approached Douglas Hutchings with the idea of providing music at the church's 4:30 p.m. Sunday mass. He wanted the mass, which was not widely attended, to attract a younger group. Hutchings, who had been playing keyboards and singing for several years at another church with his best friend, vocalist Tara Lakeman, decided to put together a Christian band. He found Kyle Hancharick, a guitarist, singer, and songwriter, at Burke Catholic High School. Their three voices blended into perfect harmonies. Matt Lee brought his soulful violin to the mix. Soon, Gus Morales found Full Armor. He heard the band at mass and loved their sound. He added electric guitar to the group. Matt Juliano, the youngest and newest addition to the group, keeps the beat beautifully on drums. Together, they bring their unique voices and talents together every week at this worship service. Their sound is upbeat yet thoughtful. Their influences include Casting Crowns, Michael W. Smith, Chris Rice, and Jeremy Camp, but their style is all their own. While they cover many other artists, they have their own voice. The group released it's first CD, Against The Flow, in January, 2007. The group's new CD, This Day, will be released in April, 2008. Both discs are collections of original songs, written from their hearts, always with their eyes upward. The band travels to many churches, providing music at services and concerts for all denominations. They focus on what unites Christians-their beliefs and values. Full Armor has played for many congregations, youth groups, and Christian coffee houses in the Hudson Valley area, as well as in New Jersey, Connecticut, and upstate New York. The band gets it's name from the Bible passage Ephesians 6:12-17. Paul dares us all to put on the full armor of God, to stand our ground and take up the shield of faith. This band of young adults does this every performance, every service, everyday-proud of their beliefs, joyful, and encouraging. Their songs are moving, thought-provoking, and inspiring. They give our youth hope. And they give hope to us. The band continues to provide music at the 4:30 service at Mt. Carmel and the people have responded. Now, the pews are filled and their positive message of love and worship continues to find it's audience.

Here's what you say about
Full Armor - This Day.