Tara Leigh Cobble - Things You Can't Stop with Your Hands 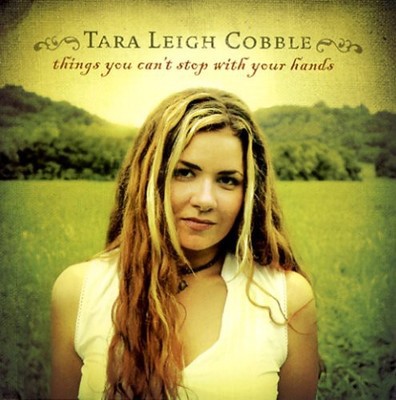 {PRESS} Ft. Worth Star-Telegram: 'Her lyrics often seem blazed together by a voice that holds comparison to Sheryl Crow.' Nashville Rage: '...edgier take on Natalie Merchant-style songwriting.' Relevant Magazine: 'If you've never heard her laugh, you're missing out. If you've never heard her music, you're missing out even more.' Nashville Scene: '...frames her expressive voice and increasingly mature songwriting with folk-rock grooves.' Akron Beacon Journal: '...Sheryl Crow meets David Wilcox... an organic blend of folk rock and roots rock, with thought-provoking themes. Her warmth and good humor make an audience feel as if they are sitting down with an old friend.' Grassroots Music: 'Her latest project, the alternately gutsy and folksy, rock-tinged 'Things You Can't Stop With Your Hands,' is nothing if not vulnerable. From the slightly rebellious 'White T-Shirt' to the raggedly gut-wrenching 'Back When (You Used To Adore Me),' Tara Leigh wears her heart on her sleeve, and invites you to examine it.' The Phantom Tollbooth: '...one of those artists who deserves for people all around the country to stand up and take notice.' ----- {BIO} While on stage playing her first concert, Tara Leigh Cobble made a split-second decision to become a professional musician. Within a month, she had finished the last of her college classes and skipped graduation to tour around the south. Admittedly, she didn't know much about soundchecks or how to change her guitar strings. 'It wasn't so much a leap of faith as a leap of ignorance,' she says. 'If I had realized what I was getting into, I never would've done it. By all accounts, I should've failed terribly; but since I didn't, I can't help but believe that God has brought me here.' Tara Leigh set out to educate herself on this strange new world, and soon found herself sharing stages and tours with the likes of Matt Wertz, Dave Barnes, Bebo Norman, Plumb, Eric Peters, and Steven Delopoulos (formerly of Burlap To Cashmere). With her sophomore release, 'Home Sweet Road' (2002), she was a part of Performing Songwriter's annual 'Salute To Independents,' and she began to acquire a following of fans so loyal that they have been known to drive up to 30 hours roundtrip for one of her concerts. More than six years since that first concert, Tara Leigh is still trekking all across the country, but these days she's doing it to support her third album, 'Things You Can't Stop With Your Hands.' All 500,000 miles spent on the road have served well to mature her songwriting and her stage appeal. That maturity is certainly evident on 'Things....' She has raised the bar with this album, and she challenges the edges of both folk and rock in a way that showcases the full range of her musical diversity. From the longing ache of 'Quiet Love Song' (which she sings a capella) to the gritty edge of 'Damage,' Tara Leigh's voice runs the gamut with precision. Sonically, she brings to mind artists like Sheryl Crow and Natalie Merchant, but she paints her lyrics with the ease and depth of David Wilcox and Patty Griffin. In 'Back When (You Used To Adore Me),' there is an honest brokenness: Your words were always starting things / That your heart was never finishing / You used to stand so close to me / Back when /... And I've wasted years trying to get back to 'back when.' 'Things...' intentionally spreads itself across the genre-boundaries, and Tara Leigh handles the transitions with ease. It's fitting, given that the album itself is loosely built around the idea of change. 'When I started working on this album, my family was in the midst of losing their land to a new highway, and my friend was in the midst of a divorce,' she says. 'So my mind was wrapped up in all these things that are beyond our control - from hardships like death and unrequited love to the beauty of redemption or one of those unexpected 'perfect days.' I tried to reach deep into those moments of uncertainty, surrender, and ultimately... joy.' Even detached listeners will recognize their own stories on 'Things...' and reach a little deeper too. --Trey Bowles Cowboy Sessions, Inc.

Here's what you say about
Tara Leigh Cobble - Things You Can't Stop with Your Hands.