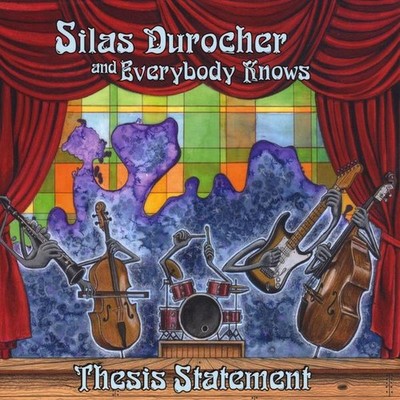 Born in 1985 in Austin, Texas, Silas Durocher is a composer, guitarist, songwriter, and singer who "understands that there are many mansions in the house of music and naturally partakes of all of them." He has played with a number of bands, most notably Stone Soup (folk-funk), which performed throughout southern Florida for two years, shared the stage with nationally touring acts, and recorded a CD entitled Dancin' Shoes. Enrolling at New College of Florida in 2003, Silas began studying theory and composition. In 2006, Silas composed two pieces for the Florida Wind Quintet, both of which were published and sold internationally. Silas' Brass Quintet in Three Movements was performed in the spring of 2007 by the Florida Brass Quintet, and his composition Why Not? was performed by the Keowee Wind Trio of Asheville, NC later that year. Silas Durocher and Everybody Knows has been an ongoing project that synthesizes the accessibility of funk and rock n' roll with the intellectual stimulation of classical music. In the fall of 2008, the ensemble released their debut album, Thesis Statement. Featuring an energetic mix of rock musicians and classical performers, the all-star group has been highly praised for it's original and exciting live performances which have been drawing large audiences of all ages and listening backgrounds. The compositions for this ensemble create a truly unique style that blends Silas' many interests into a "distinctive musical voice." Silas currently lives in Asheville, North Carolina, where he is immersed in the exciting local music scene, playing with nationally and internationally touring artists such as soul-funk band Laura Reed and Deep Pocket, soulful singer-songwriter Oso Rey, and gospel-rock outfit David Earl and the Plowshares.

Here's what you say about
Silas Durocher - Thesis Statement.