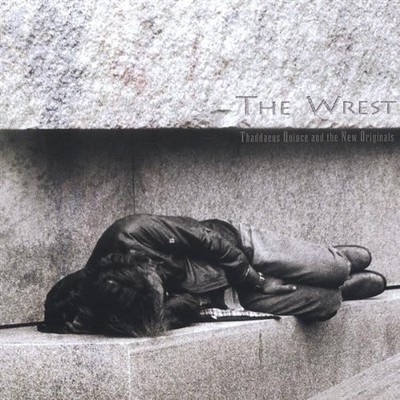 THE WREST Whether the result of greater musicianship, maturity, or an intensifying collegiality with his far-flung fleet of players, there is an ebullience in The Wrest-a hidden delight-not fully realized in the previous two recordings by our intrepid troubadour. Surely there remains creative continuity, however. Quince, survivor of the earthquakes, winds, and fires of the shopping mall state, our upstart cold war baby, is still sending us his samizdat of the soul, his sketches of living in but not of the world. The songs continue to explore wry emotional contradictions, deceptively simple home truths, and the divine discontent that is the heartbeat of the Quince expression. Truly, he's still not found what he's lookin' for. We are again reminded that 'if you want to be a dreamer, you've got to have a plan.' No one's edited out the pain of that poor lonely bloke whose lady only wants 'my paycheck, my pension, and my home.' There's some nice nasty rockin' in the humorous 'Might As Well Be in Egypt' as the disaffected, would-be lover concludes: 'After all you've put me through, abstinence will be a relief.' Yet for all of Quince's legendary restiveness, The Wrest moves into both a more soaring and more settled musical trajectory. A recurring motif, ala G. M. Hopkins' 'Kingfisher,' is flight-the undimmed 'blue compromise' of sky. The band seems freer, more spontaneous. The voice is more familiar, aware. The range of moods is more skillful and surprising. The disc gets book-ended by expansive instrumentation-a lyrical Weisbergian flute that opens 'Sail Kite' (when 'we left all futures behind') and ends with the transcendent 'transfigured melody' of 'The Echo.' In between, a gracious new signature piece, 'It Takes Time,' washes up into the tracks like a warm ocean wave: 'I found the freeway; you found your own way home. After all the oceans you've crossed to get here... It takes time to get things together.' Given the craven impatience that seems to define what Stanley Kunitz calls our 'modern super state'-there's a lot of hard-earned common sense in this bit of rock ballad pastoral counseling. It-does-take time. The final tracks, including 'Aloha,' especially move toward the kind of deeper satisfaction whose poetic corollary might be found in Wallace Stevens' 'Final Soliloquy of the Interior Paramour': How high that highest candle lights the dark Out of this same light, out of the central mind, We make a dwelling in the evening air In which being there together is enough. Quince has always been stalking, in one way or another, the apostolic question partly framed in 1 Corinthians: 'What man knoweth the things of a man, save the spirit of man which is in him?' I lived with Quince in exile, and know of his interest. He confided that early in his minstrelry [sic] he was convinced of the irreconcilability of 'disco' and the 'spirit of man.' Dating to the 70s, he has been trying the spirits of the age. He ran the numbers on Pan Am in London and Tehran-always two steps ahead of grief and fortune, finding the secret passageways to the grateful gardens, escaping the matrix, testing the real. In the Keys he evaded Donna Summer and heard the manatees at midnight. Later, in the late 80s and early 90s, as the Berlin Wall came down, our man faced the end of history. He came in from the wilderness, a Harvardian void of form. But for Quince and his ilk, history and it's evils refused to end. The disciplines of the bipolar standoff that brought us, even amid the echoing crucifixions of Vietnam, some relative security, did not last. Bosnia and Chechnya were only round one as we slouched into the 1990s. We experienced less the cruel acids of modernity at this time, as we did the silicon swamps of post-modernity. Co-dependent couch potatoes consumed each other. Starbucks became a platform for both sacred and profane. In the midst of it all, as Quince records, was a longing for community. What came instead were virtual 'networks.' We got 'coalitions of the willing.' We got life as endless Windows, of Osama in a cave, and the acceptable insanity of Brittany Spears in a Los Vegas wedding chapel on the front page of USA Today. America of the hanging Chad-of Pulp Fiction, of Halliburton and Bechtel in a newly democratic Babylon. Where have you gone, Joe DiMaggio? For the Quince project, however, the perversity of the Zeitgeist is never the real or final story. What things, as the question goes, knoweth a man? Our hero, of course, no longer spends as much time in the world's casbahs and grottos. He no longer frequents the upstairs at the Middle East. Lately, he's been spotted in the kid-friendly corner booths of the Cracker Barrels that dot the exit ramps of America's interstate highway system; he's the one with a telltale bit of oatmeal on the balded forehead, a drool smudge on the flannel shirt. Such are the present ecstasies. Of course, this is not to suggest that Quince has grown satisfied with some kind of cheap personal salvation; he's not content with a middle class Walmart of grace, cannot easily justify passing by on the other side of the street. The shared grief is all too real in the America of the moment-and ever easier to forget. Against forgetfulness, then, or the seductions of a numbing nostalgia, Quince has wrestled forth The Wrest. Robert Marquand Paris; Beijing April 2004.

Here's what you say about
Thaddaeus Quince - Wrest.