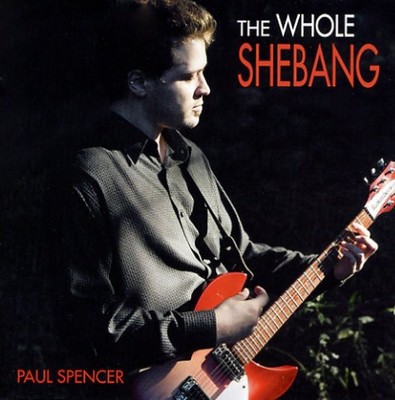 2005's 'The Whole Shebang' marked the debut of CT native singer/songwriter Paul Spencer. Opening with the 1-2 punch of 'We Don't Give a Damn' & 'Instant Crush', the first an AC/DC-meets-The Replacements rocker, the second a frenzied Bo Diddley romp that manages to sound both fresh and classic at the same time, these two songs make it clear that Paul Spencer is broadcasting live from Garageland, and yes, he has his bullshit detector on. 'Bettie Page' keeps the momentum going with it's Ramones-like hooks and twisted 50's imagery ('locks the world in a cage / she's kinky like Bettie Page'), segueing into the menacing 'Going Higher', a perfect blend of MC5 & Trompe Le Monde-era Pixies that contains a great opening line: 'the universe is expanding / and so is my mind'. 'Hard to Get Across' conjures up mid-70's George Harrison, complete with some beautiful slide guitar work. 'Asian Eyes', with a catchy chorus & sugary harmonies is a slice of mellow power-pop that gives way to the acoustic, mandolin-tinged 'Say Goodbye to Summer' where Spencer releases his inner Dylan to great effect. 'She's One of a Kind' crosses 60's garage rock with 70's power-pop in an irresistible mix of handclaps, hooks & clever lyrics ('she likes Dali and David Lynch / and says the Pixies are the missing link'), while 'New Mexico' pushes Spencer's sci-fi fixation to the forefront with it's mentions of UFOs & parallel universes, all this put to a frenetic beat and killer riff. 'Hands Off' breezes through with punk guitars and sunny harmonies that will keep you humming long after you hear it, and 'Don't Let the World' shows that Spencer can write a disarmingly tender ballad just as well. 'Walk Away Christie' recalls late 70's Cheap Trick in the rich wall of guitars/synthesizer that anchors the power chorus, before flowing into the quiet acoustic despair of 'Worried About You', a song where the narrator helplessly witnesses the slow death brought on by drug addiction ('...now your eyes have no sparks / and your body's full of needle marks'). Producer Paul Opalach gives the sound just enough shine while maintaining a healthy rawness that suits the songs well. By the time we get to the last track, Paul Spencer has already flexed his songwriting muscles rather impressively. A glorious distillation of punk, garage & glam rock with a happy-go-lucky vibe, super-tight harmonies and a solo that threatens to burn the speakers down, 'The Whole Shebang' is a bona-fide classic that closes the record in style and leaves the listener wanting more! ----------------- THE BIG TAKEOVER (Issue 56, Apr.'05): 'Paul Spencer infuses his meaty, Cheap Trick/Heartbreakers-like garage/power-pop with thick catchy riffs, and a scratchy, bluesy voice which alternately recalls Elvis Costello, Paul Westerberg and The New York Dolls' David Johansen.' - Mark Suppanz, The Big Takeover INDIE-MUSIC.COM: 'In sheer devotion to that which we hold above all other things, rock 'n' roll, Paul Spencer doggedly pursues an audio shrine to The Greats on his album, 'The Whole Shebang'. Whether a determined attempt at recreation or a modern twist with a little classic resurrection, Spencer incorporates all things sacred to achieve that sound. With vocals floating between The Pixies and The Clash and some killer guitar riffs every so often, Spencer runs his fingers through his hair and sets out to prove rock 'n' roll isn't dead after all. Spencer's triumph can be found simply in that he actually achieves what he seems to be striving for ... solid melodies and a sound nearly anyone can nod a head to. His lyrical transitions are as thick and amber-pleasant as honey, and he has the ability to make you believe he has felt and learned something from those experiences he references.' - Genevieve Will, Indie-Music.com STYLUS: 'Paul Spencer's debut, 'The Whole Shebang', bursts out of the gate in a hail of bullets. It has the raw nerve attitude of early new-wave artists like Elvis Costello or Joe Jackson with smart lyrics to back it up. It's obvious that Spencer is fan of the rougher side of rock, as influences such as MC5 and Clash percolate to the surface of his music, much like Cheap Trick. Using Bettie Page as a simile never hurts. Every teenager needs an album like this in their collection.' - Broose Tulloch, Stylus ***************** Paul Spencer & The Maxines' music has been featured on the MTV shows 'Cribs', 'My Super Sweet Sixteen', VH1's 'Hogan Knows Best'. Paul Spencer and The Maxines have also appeared on CD compilations alongside artists such as Spoon, Okkervil River, John Vanderslice, Architecture In Helsinki, Suzanne Vega, Emerson Hart (Tonic), Fionn Regan, Ani DiFranco, David J (Bauhaus / Love And Rockets) and Marty Willson-Piper (The Church / The Saints). *****************.

Here's what you say about
Paul Spencer - Whole Shebang.