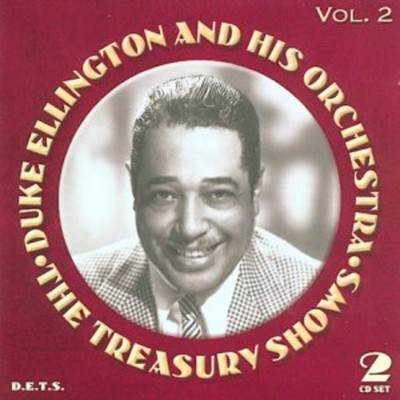 This two-CD set includes two broadcasts in the series of Treasury Department transcriptions issued as V-discs during World War II plus a Treasury Star Parade program from 1943 and a portion of a Mutual Broadcasting System program from October, 1945. These live performances have surprisingly good fidelity as they seem to originate from the actual masters rather than well-worn V-discs, which has all too often been the case with commercial issues of this series. Aside from the distraction provided by the rather stiff network MC announcements (which often clash with the opening of a song), the band seems well rehearsed and the star soloists, Johnny Hodges, Jimmy Hamilton, "Tricky Sam" Nanton, Ray Nance, Cat Anderson, and Ben Webster in particular, are in top form. Less successful are some of the vocal numbers, especially Kay Davis' excessive operatic vibrato in "If You Are But a Dream." in addition to the expected hits ("I'm Beginning to See the Light," "It Don't Mean a Thing (If It Ain't Got That Swing," and "Creole Love Call") there are actually quite a few lesser known songs like "Tonight I Shall Sleep," "Three Cent Stomp," and "Kissing Bug"; there are also a number of rather rarely heard compositions ("Riff'N Drill," "Fishing for the Moon," "Frantic Fantasy," and "Go Away Blues") and, fortunately, none of the long medleys of hits that have turned up on far too many of Ellington's live recordings (although excerpts of the recently premiered "Black, Brown & Beige" are presented in medley form). The sound achieved by Jack Towers from this material recorded over a half century ago is phenomenal, and Ellington collectors will be glad to acquire these historic recordings, even if they bought the commercially issued LPs during the 1970s, because the sound has been greatly improved. - Ken Dryden.

Here's what you say about
Ellington, Duke - The Treasury Shows, Vol. 2.