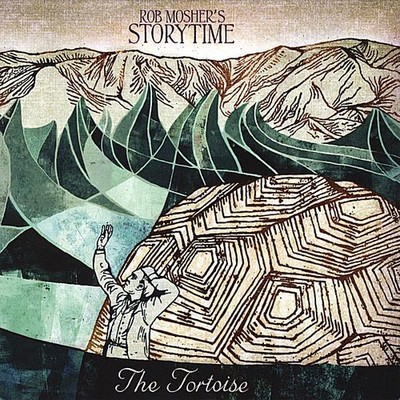 Heartbroken and with a song in his heart, Rob Mosher packed a pencil, his soprano sax and hopped on a bus for New York City. Fast-forward four years. The 28-year-old Canadian-born musician, who has received a Juno award as well as numerous grants from the Canada Council for the Arts, added oboe and English horn to his palette, and formed a 10-piece ensemble called "Storytime" whose compelling debut CD The Tortoise shows that he is a force to be reckoned with. A self-taught composer, Mosher began writing music in 2003 after studying jazz performance at the University of Toronto where he enjoyed exchanging ideas with classical composers. Since then, he has been steadily making his way on the New York scene as a leader and sideman. His "Storytime" ensemble includes a diverse group of musicians, who have a background in jazz, classical and improvised music, able to match his creative vision. "I've always felt this brewing sensation of music inside me that wants to make itself known," he says. Asked about the group's name, Mosher explains, "I was searching for a band name that welcomed people into my music without creating expectations of what they'd hear. At first I was concerned the name sounded childish or non-serious, but hearing stories as a kid was easy fun, and the more birthday candles I had on my cake the more I appreciated the deeper messages underneath. My music is much the same way in that I create simple melodies that are supported by sophisticated musical structures." The Tortoise is a lushly scored musical odyssey that contains echoes of Wayne Shorter, Gil Evans, Kurt Weill, Darius Milhaud, Debussy and Bach, reflecting Mosher's embrace of a wide range of influences which have coalesced to create his singularly independent compositional voice. The CD traverses many musical landscapes - all held together by Mosher's multi-faceted orchestration and ingenious use of instrumentation (saxophones, oboe, English horn, clarinets, flute, trumpet, French horn, trombone, electric and acoustic guitar, plus bass and drums). ROB MOSHER - soprano sax, oboe, English horn SAM SADIGURSKY - flute, piccolo, clarinet, alto sax PETER HESS - clarinet, tenor sax BRIAN LANDRUS - bass clarinet, baritone sax MICAH KILLION - trumpets, flugelhorn RACHEL DREHMANN - French horn MICHAEL FAHIE - trombone NIR FELDER - acoustic and electric guitar GARTH STEVENSON - acoustic bass ZIV RAVITZ - drums and percussion.

Here's what you say about
Rob Mosher - Storytime-The Tortoise.