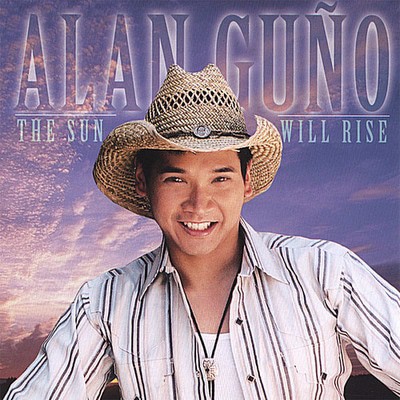 'The Sun Will Rise' is the debut country album by Alan Guño! In the tradition of the "concept album" begun with 'Boy Diva', this album also has a story to tell - the story of a young man finding himself at the crossroads of his life. The 11 songs on 'The Sun Will Rise' reveal his life, his feelings, and the events that have begun to shape who he is - and reveal his hope for who he can become. As Alan explains, 'These are songs told from the perspective of a young man. He grew up in a small town, with loving parents, a heroic older brother, and a little brother who gets into too much trouble... In fact, this guy had also been headed down the wrong path, too - until he found some new perspective in big city life - and encountered all the crazy, joyful, and heart-breaking experiences that a young man finds on his journey... He is now ready to embark on new adventures, but comes back home as a way of getting his bearings.... Because for all his new experiences and wisdom, he finds that he not only doesn't have all the answers, but since he's been away, the questions have gotten bigger!' 'Sometimes, your early years can just fly right by you,' Alan continues. 'And if you're fortunate, you may get the chance to just stop for a moment to catch your breath and think 'What in the world was that?'' 'But it is a very sacred moment. It is that one moment of clarity where you can both look back and look forward - to both honor your past and accept your future... and armed with a solid sense of self, you can then move forward into the new adventures that await.' 'The Sun Will Rise' features songs that reflect this kind of hopeful attitude - from the charm of "This Puppy's Broke" to the gospel flavor of the title track, to the glorious optimism of "State of Texas" and the humorous revelations of "Driven to Distraction". And there is one song that has a particularly special meaning for Alan. "'Prayer for My Brother' is a song for all those who have loved ones who are serving in the military," explains Alan. "It may be impossible to properly and fully express the gratitude that we should have for those who keep us safe. So this song tells the story about our main character reflecting on what his older brother means to him - and how he may be a hero overseas, but he wants him to come home and be his hero again back home as well." All songs on this album were written by Alan and co-produced with music veterans Gary Tharp, Larry Beaird, and George Reich. Boy Diva Music produced, with distribution by NAPA FunLand.

Here's what you say about
Alan Guno - Sun Will Rise.