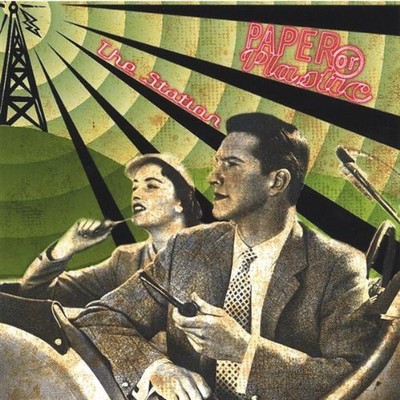 Paper or Plastic was formed in 2002 by some guys in middle school who wanted to rock & roll. Before long, however, they realized they needed to set themselves apart from the other approximately 12,476,894 up and coming bands in existence. With that in mind, two of these guys, David Pollock and Ty Whittier, dropped their immature, middle-school style of playing and gained supreme musical clout. But how, you ask, did they do it? Ty quickly found a niche as the eloquent lyricist, with Dave as the brooding musical genius, and a new drummer, Seth Norman, a DJ by night, whose beats let their music flow. The talented members, combined with their unique sound influenced by Costello, CAKE, Bowie, and Sinatra (yes, seriously), make up Paper or Plastic's divine musical prowess. -------- Recent accomplishments: -The only pop/rock'n roll band to perform on the 2003 Warped Tour -National college radio airplay of 'Come Again', including a top 50 album on KSCU, California -'West Virginia', so far a semifinalist in the 2005 International Songwriting Competition, distinguishes David and Ty as two of the top amateur songwriters of 2004 -One of nine bands selected to perform at the EMP (Experience Music Project in Seattle) Sound Off showcase, Feb 2005 -Film placement, including the 2003 Longbaugh Film Festival hit 'Making Maya' ---------- Favorite Reviews 'You guys have some real potential...I like the chances you are taking in your music. It's good to have you guys kickin' ass as the next wave of Portland indies. Rock on baby.' -Geoff Byrd 'I have taken a shine to this Portland based four-piece. There is an element of fun about them that is appealing to me...they have a reasonable semblance of pop smarts...rather than a contrived emulation of their influences.' -Conrad Teves, Demorama 'If the Beatles were to start in this millennium, they might sound like this.' -Garageband.com reviewer 'This band owns.' -Some guy at Music Millennium in Portland 'You are talented...I love your style...reminds me of Ben Folds Five, which is a good thing!' -Garageband.com reviewer 'The EP sounds good man.' -Kevin Roberts 'You sound like a big band on crack.' -Garageband.com reviewer 'Your music has inspired me to start an illicit drug habit.' -An unknown fan.

Here's what you say about
Paper or Plastic? - Station EP.