Jazz Spectrum - Song Is You 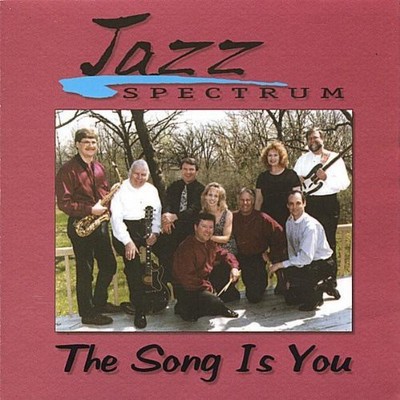 IN 1994 a vocal quartet was formed, joining the long establish instrumental quintet, JAZZ SPECTRUM. Bob Zaun, piano, organized the vocal ensemble and, from the outset, has written all their arrangements. Since Jazz Spectrum's inception in 1980, there have been surprisingly few personnel changes. THE SINGERS STACY EIFERT, alto, is Bob Zaun's daughter and is an original member. She is married to John, the drummer. They met when Stacy was a freshman and John a fifth year senior at the University of Illinois. They both played snare drum in the Marching Illini drum line. PEGGY CONIFF, soprano, was a member of Choral Dynamics, a local community chorus, when she met Bob in 1993. Bob was playing acoustic bass for the choral group. After experimenting with a couple different lead voices, Peggy was asked to 'fill-in.' She's been 'filling-in' since 1994. DAN MAHER, tenor, was also a Choral Dynamics singer. He impressed Bob with his precise pitch and clear tone. After an abortive attempt to have their bass player, play and also sing (ala The Four Freshmen), Dan was asked to join the group...another original since 1994. DALE TUBAUGH, baritone, is yet another ex-member of Choral Dynamics that was discovered. He joined the group in 1995 after the existing bass singer resigned due to too many rehearsals! THE PLAYERS JOHN EIFERT, drums...a premier drummer and music major from the University of Illinois. After finishing his student teaching in 1988, he was recruited by Bob Zaun to work as a mortgage loan officer. John has been Jazz Spectrum's drummer ever since! CRAIG BURGESS, saxes...a vibrant, happy player. You'll like his spontaneous licks! He's fun to watch, too! He and Bob Zaun, started the Jazz Spectrum as an instrumental quartet in 1980. TOM SIEVERS, bass...joined Jazz spectrum in 1981 and performed until family obligations forced him to retire. Fortunately he was able to complete recording the Spectrum's Christmas CD in 2004 before bowing out. BOB VALE, vibes, guitar...everyone loves this guy for his solid guitar playing and cool riffs on vibes. Bob joined JS in 1988. He was forced to retire about a year after this recording due to a hearing loss. He did join us, however, for a few numbers on the Christmas album. BOB ZAUN, piano...does all the vocal and instrumental arrangements. He also wrote the vocalese lyrics to 'You Are The Sunshine Of My Life' and 'Leap Frog.' His poignant words to Brahms' Lullaby and 'Alice In Wonderland' will touch every parent's heart. THE GUEST MUSICIANS LARRY BOISEN...a talented writer, composer and player. He performs here on alto and tenor sax, clarinet, flute and harmonica. A great friend of Jazz Spectrum and 'first call' if Craig is unable to perform. BUDDY COLE...baritone sax....a favorite big band player for the summer community concert circuit. A valued special guest for Jazz Spectrum. FRANK LESTINA...acoustic bass...performs on Alice In Wonderland. He is the Fine Arts Director and Orchestra Conductor at Vernon Hills High School in Illinois. CHUCK HEATH...wind chimes...a retired judge from Marinette, WI. Chuck was at the recording sessions as 'staff photographer.' Imagine his surprise when he was pressed into service as a performer. We even had music for him. It consisted of two pages of rests!

Here's what you say about
Jazz Spectrum - Song Is You.