Tim Patrick - Shadow of Your Smile 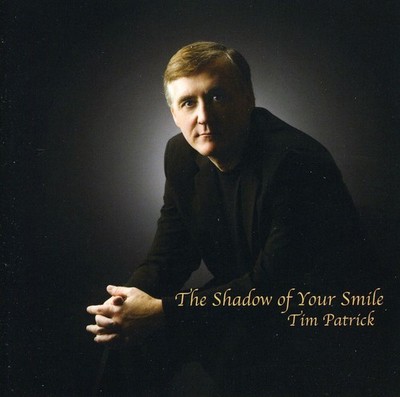 My Musical Journey... I was a guy who was too afraid to sing in the shower for fear that my family would hear me and tell me to shut up. But, in August 2004, I found myself in front of a microphone for the first time in my life at Nye's Piano Bar in Minneapolis, Minnesota. I had decided that if I didn't try it at that time that I'd regret it for the rest of my life. I heard my name called by the pianist at Nye's. Lou Snider had been the pianist there for close to 40 years and knew how to make a new singer feel comfortable. As a matter of fact, my mother used to go down to Nye's to sing with Lou. I grabbed the microphone and the lyrics book. As I fumbled to find the words for 'Unforgettable', Lou asked me what key I wanted to sing in. I didn't have a clue. She had me sing a couple of the opening words and quickly found my key. I held the book up high enough to hide my face and my shaking hand held the mike up to my mouth. After I finished singing, I was surprised to hear very loud applause. Of course, their applause encouraged me to sing another song, 'I Left My Heart in San Francisco'. The applause after my second song sounded thunderous to me and I was hooked! I returned to Nye's every weekend for two months until I got up the courage to audition for 'Amahl and The Night Visitors'--a mini-opera put on by the Woodbury Community Theatre in Woodbury, MN. I was not exactly looking to do an opera--I was just trying to find any musical that was currently looking for my talents. I won the part of a singing and dancing shepherd (singing very high tenor). The experience in Amahl gave me the courage to audition a second time, and I earned the part of one of four male lead singers in 'The Original Broadway 'Swing''. It was in this show that I learned how to scat. After Swing, I was in 'The Music Man'. That summer, I was invited to sing in a 'Singer's Showcase' at the Times Cafe in Minneapolis, MN, and got to sing mainly Sinatra songs for an hour with the extremely talented Lori Dokken at the piano. My fourth play was 'My Fair Lady', and I was able to play the part that I had wanted to play all my life but had only fantasized about-'Freddy', the love sick young man in love with Eliza Doolittle. The theatre sure has a lot of tricks to make a guy look younger! During the run of this play, I got to sing 'On The Street Where You Live' more than 30 times and it never got old! In January 2006, I decided to record my voice for my 'someday' grandchildren. This unofficial, first CD turned out so well that I gave it to my family and closest friends. Unbeknownst to me, a copy of my CD found it's' way into the hands of Joanne Grauer in Reno, Nevada, pianist to Andy Williams, Michael Feinstein, The Osmonds, The Lennon Sisters and many more superstars. Joanne even taught Barbara Streisand how to play piano. Joanne later asked me, ' Do you know how long it took me to realize that you had a GREAT voice? One measure!' I thank my sister, MJ, and mother for introducing me to Joanne through my first CD. After a number of phone calls, Joanne and I met in Reno on October 18, 2006 to work on musical charts. After I sang my first song for her at 10 AM in her home studio, she asked me 3 questions: You don't normally sing this early in the morning, right? You don't think your voice is warmed up yet, right? and You think you could do a much better job with this song this afternoon, right? I replied, 'Yes.' She said, 'OH MY GOD!' What a compliment! In the middle of the third song, she yelled, 'STOP! We can't do this anymore.' I asked a startled 'why?'. She said, 'We have to get you into a recording studio NOW!' I told her that she knew as well as I did that getting recording studio time takes 6-8 weeks advance notice. She said, 'Let me make a call.' Joanne got us 10 hours of studio time over the next two days so we could record an entire CD. She also got two other world-class musicians: Bill Heise on drums and Gary Douglas on bass. With the band in place, we arranged, rehearsed, and recorded 10 songs in 10 hours! This was a record for Tanglewood Productions in Reno. By the end of the first day, a couple people were calling me the 'one take wonder'. My new 'official' CD will be out in December 2006. You can be one of the first to pre-order it on this web site. I'm sure you'll enjoy it as much as we enjoyed recording it. I've been asked by the Minnesota Jazz Orchestra to be their number one alternate to their regular singer. I sang with them once and it was fantastic! I can't wait to be asked back. I've been doing a lot of private gigs lately but hope to break into the jazz clubs soon around the Minneapolis/St. Paul, Minnesota area. So, there you have it...my bio SO FAR. Please continue to check this web site for further updates or sign up for the newsletter and I'll let you know the rest of my unfinished musical journey as it unfolds. TO BE CONTINUED...

Here's what you say about
Tim Patrick - Shadow of Your Smile.