Eric Erickson - Shadow of the Moon 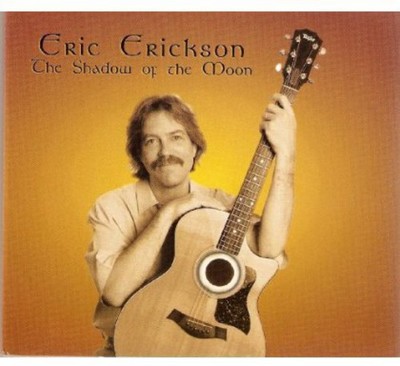 Eric Erickson started out life the son of a career Army officer, spending much of his childhood at West Point. After the requisite stints in various high school rock 'n' roll bands and several years studying classical guitar, Eric was half of a popular Hudson Valley folk duo before finally going it alone. He has also spent the last 20 years singing tenor with the a capella early music vocal ensemble, Woodstock Renaissance. A second career in radio found him as a member of the original air staff of the legendary WDST and it's internet offspring, RadioWoodstock.com, where he hosted folk and acoustic music programs. He lives in Woodstock, NY with his wife, Ellen, and their two---no, now it's three---cats. Having released his début Ardith Recordings album, At Long Last, in 1999, Eric now follows it up with The Shadow of the Moon. Once again, he and his acoustic guitar are joined by some of Woodstock's finest musicians: Artie Traum lends his lead acoustic guitar---at times caressing, at times blistering---to three cuts; Jay Ungar (fiddle) and Molly Mason (mandolin) join with Artie for the country-flavored love tune, Tip My Heart; Betty MacDonald's violin is featured prominently; Abby Newton adorns the aching For Every Name with her lovely cello; Gus Mancini adds his sax to a song of tolerance, Only One Way to Love; and Peter Davis dances through the sweet Me and the Moon on clarinet. The entire album is anchored by the band of Sam Zucchini, drums; Scott Petito, bass; and Vinnie Martucci, piano and organ. Eric is joined by Ellen for the a capella title track. And the moon makes several appearances.

Here's what you say about
Eric Erickson - Shadow of the Moon.