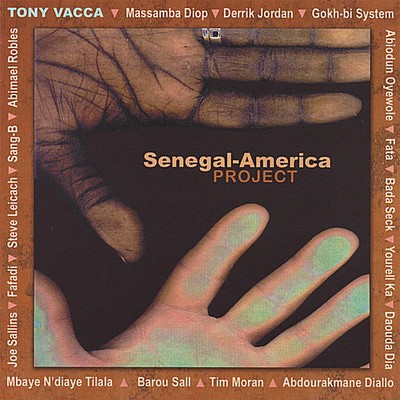 The Senegal-America Project Featuring From America: Tony Vacca and the World Rhythms Ensemble with Tim Moran, Joe Sallins, Steve Leicach, Derrik Jordan and Abimael Robles Abiodun Oyewole (of The Last Poets) From Senegal, West Africa: Massamba Diop (tama drummer with Baaba Maal) Momadou Ndiaye, Diasse Pouye (of Gokh-bi System) Barou Sall, Abdourakmane Diallo, Fafadi, Fata, Mabye Ndiaye Tilala, Sang B, Yourell Ka, Daouda Dia, Omar Ndiaye "The rhythm and music spectacle they create together as the Senegal-America Project combines Jazz, World Music, Spoken Word, and Senegalese Hip-Hop. It's an intoxicating blend, and they seriously rock the house on both sides of the Atlantic." Tony Vacca and the World Rhythms Ensemble have put a uniquely American signature on their hard-hitting, earthy fusion of Jazz, World Music, and Spoken Word. Using balafon, electric violin, saxophones, electric bass and a veritable world of percussion, they re-define the edge of tradition and innovation. The music of Gokh-bi System is ancient and contemporary; it's part city and part village, and completely overflowing in the rhythms, songs, languages, and acrobatic dance of Senegal's capital city of Dakar. Massamba Diop is the tama drummer for Baaba Maal and undisputed traditional champion of the tama drum in Afro-pop music. Music critic, Al Evers wrote, "Their music is a journey to all the corners of the world, from Africa to India, Paris to New York City and beyond." At the Lotus World Music Festival Jason Nickey's headline was "World beat music blends Jazz, Hip-Hop and Drums to audience's delight." He went on to write, "The group (World Rhythms and Massamba Diop) wove a complex sonic tapestry that soon had spectators in a trance...Five minutes before they began, the tent was almost empty; five minutes after they began it was jam-packed with dancing spilling out onto Fourth Street. After three songs they were joined by Gokh-bi System, who were simultaneously like the grandfather and grandson of American hip-hop; both ancient and progressive... The sound they created together was itself a living, breathing thing, with rhythmic patterns organically changing and growing as the music went on." The other Senegalese artists on this recording all represent equally distinctive voices, from ancient to contemporary, from vocal to instrumental, that illustrate the diversity of Senegalese music and the mix of cultures from which it comes. For more info: Over the course of his career, Tony Vacca has made a habit of pushing the already adventurous conventions of World Music into new territory. The list of musicians that he has performed or recorded with is as diverse as his own music. They include Pop icon Sting, Jazz and World Music legend Don Cherry, and Senegalese Afro-pop singer Baaba Maal. But in the end, it's the people in his own group, called World Rhythms Ensemble that have the most profound influence on his music. The musicians in his band are Tim Moran, Joe Sallins, Derrik Jordan and Steve Leicach. Collectively known as World Rhythms Ensemble, they use saxophone, electric violin, electric bass, and an amazing array of percussion instruments to create an intoxicating mix of Jazz, Funk, World Music and Spoken Word. 'It's no accident that this group is like it is...I mean every one of these players is a dedicated musician, composer, and leader in his own right. Through this long-term collaboration, we've created an almost psychedelic, World Music spectacle. Every time we play together I'm amazed by what happens. My respect and appreciation for each of these musicians just keeps getting deeper... I guess when you put this kind of extraordinary skill together with our experience, and the spirit of generosity that everyone brings to this music, well then amazing things are going to happen on a regular basis. But it still blows my mind.' Vacca is a dynamic performer; a curious blend of athletic percussionist and street-wise poet. His interest in innovative Jazz and World Music, along with fourteen study trips to West Africa, have resulted in his unique approach to percussion music, and to playing the giant xylophones of Senegal, Mali and Burkina Faso, commonly called balafons. It was on one of these trips to Senegal that he met the group from one of Dakar's toughest neighborhoods, Gokh-bi System. The music of Gokh-bi System is based in part on the ancient tradition of troubadour-storytellers called griots, and in part on the politically savvy, contemporary scene of Senegal's capital city, Dakar. These young players are part of a new wave of musicians and singers who are reclaiming the African roots of Rap and Hip-Hop. They have created a globally aware, six-language commentary on life in Senegal and the world beyond. By blending the beautiful sound of the ekonting (a three-stringed African predecessor of banjo), with their powerful words, soulful vocals, and incredibly athletic dance styles, they have created something new, even for audiences in Senegal. Gokh-bi System includes members of three different ethnic groups; the Jola, the Serere, and the Wolof, so they know all about the practical challenges of multiculturalism. Their songs address issues from personal love and loss to more community-oriented issues of race, global politics, justice and positive self-image. Even the group's name, Gokh-bi System (which means "neighborhood system") tells you something about their sense of responsibility to their community, and their sense of connection to their world.

Here's what you say about
Tony Vacca - Senegal-America Project.