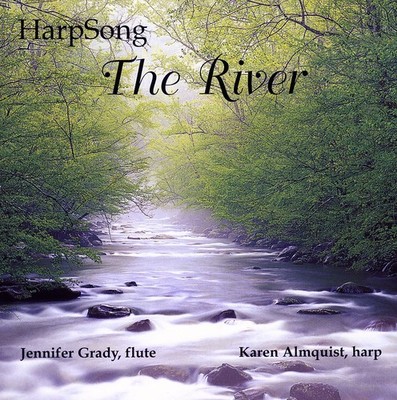 In 'The River', harpist Karen Almquist and flutist Jennifer Grady bring you a wonderful inspirational blend of Sacred, Classical, Traditional Folk, and Contemporary melodies which will fill you with peace. The composers, all incredibly gifted, span several centuries. Along with the vibrant sounds of the harp and flute, Karen 's beautiful soprano voice is hypnotizing. Sit back, close your eyes, and be swept away by the gentle flowing sounds of 'The River'. Karen and Jennifer came together to form Harpsong in 1995. Since then, they have performed extensively thoroughout the greater Willamette Valley of Oregon and have recorded three CDs together: 'Noel' (1998),'Sean's Dance' (1999), and 'The River' (2000). Jennifer Grady began to play the flute and piano as a young child. Over the last 15 years Jennifer has performed in a number of flute choirs and ensembles. In 1994 she performed with Windham Hill recording artist Scott Cossu. Her compositions have been performed at the Northwest Composers and Arrangers Concerts held at Portland State University. Her music is published by ALRY Publications. In 1998 - 2001, as a member of the National Flute Association, Jennifer performed with the Professional Flute Choir for the NFA Conventions held in Phoenix, Atlanta, Columbus, and Dallas. In May of 2000, she toured England and Wales as a member of the American Flute Orchestra. In 2001, Jennifer traveled to Charlotte, NC to record three CDs with the National Flute Choir and ALRY Publications. Jennifer currently resides in Silverton Oregon where she and her husband are raising their four children. Karen Almquist graduated from the University of Oregon with a Bachelor of Music Education degree and from Western Oregon State College with a Master of Music Education degree. Karen has taught in the Oregon public schools and now maintains a very active studio in her home of private harp, voice, and piano students. Karen freelances as a soprano, organist, and harpist in the greater Willamette Valley of Oregon. She studied harp with Marion Fouse and has performed with the Salem Chamber Orchestra, the Salem Concert Band, Salem Pops Orchestra, Marylhurst Orchestra, Music On The Mount, and Britt Festival Orchestra. Karen has been a featured soloist at The Oregon Garden and has performed with the orchestra for celebrity Bernadette Peters. Karen currently resides in Silverton, Oregon where she and her husband are raising their two children.

Here's what you say about
Harpsong - River.