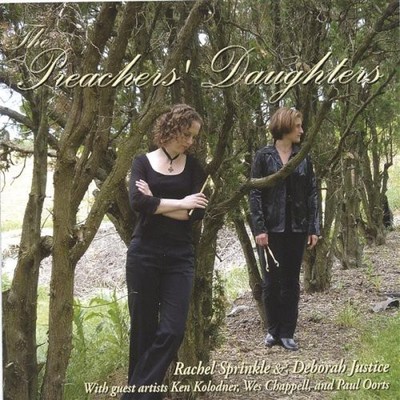 Guest Artists include, Ken Kolodner, Wes Chappell and Paul Oorts. When Deb and Rachel first met at the Swannanoa gathering in Asheville, NC we were amazed at how much we had in common. In addition to sharing similar interests in traditional music and a love for the hammered dulcimer we are both daughters of Presbyterian preachers! (Thus the clever album title) Although these tunes come from a variety of acoustic traditions in Northern Europe, Quebec, and America, they share a similar spirit of joy and energy. Deb discovered the hammered dulcimer in sixth grade during a workshop at her school. Ever since then she has made it her primary instrument, while pursuing a few others on the side. Deb's musical interests draw on many soundscapes, from American old time and French Canadian traditions to the Balkans and the Middle East. After finishing her master's degree at Wesleyan University in 2005, she published her thesis work on the hammered dulcimer communities of the United States. Deb is currently pursuing her doctorate in ethnomusicology at Indiana University. Rachel's passion for traditional music was first inspired but the haunting sound of the Irish penny whistle. She began teaching herself to play by ear from recordings and through the guidance of local musicians. Jerry Reed Smith's early dulcimer recordings created a desire to expand her playing to include the hammered dulcimer. In recent years she has blended the unique sounds of the bowed dulcimer into her music, as well as the fiddle. Although Rachel began with Irish music, she soon expanded her repertoire to include American old time, French Canadian, Scottish, Cape Breton Early American, English Country Dance tunes and the occasional classical piece. Rachel is from Sharon, SC and performs solo and with various groups and ensembles, including the 18th century group, Nonesuch.