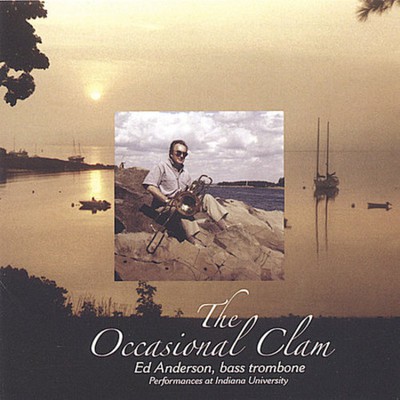 Ed Anderson, Cleveland Orchestra bass trombonist (1964-85) and member of the Indiana University School of Music faculty, has also performed with the orchestras of Chicago, Boston, New York, Louisville, New Orleans, Buffalo, St. Louis, and Cincinnati, among others. In this album, he explores the solo literature for his instrument, including new works by his son, composer and Louisiana Philharmonic double bassist David Anderson. The 'Three Greek Preludes,' by Robert Spillman, were chosen for the contrast in moods that they present, offering material that is lyric, forceful, and virtuosic. 'Elegy for Van,' by Dave Anderson, is a remembrance of Lewis Van Haney, legendary trombonist with the New York Philharmonic, and Ed Anderson's former teacher. Writing about his arrangements of 'Three Songs' by Gustav Mahler, for solo bass trombone, brass choir, and harp, Dave Anderson writes: 'Many instrumental musicians-trombonists, in particular-have recognized the protential of these songs and performed them as solo pieces.' He describes them as having an unearthly beauty and lyricism. Assisting in this performance were Bernard Adelstein, trumpet; Catherine Anderson, harp; Dave Borsvold, tuba; and the IU Trombone Choir, Keith Brown conducting. In his 'Concerto for Bass Trombone, Strings, and Piano,' Dave Anderson's writing reflects his orchestral experience and his appreciation for the traditional role of the brass within an orchestra. Sometimes in this concerto, the bass trombone voice is strictly soloistic; at other times it blends into the orchestral texture. In this performance, Keith Brown conducts the orchestra. A piano reduction of the concerto is now available. Reviewing the premiere perfomance of the 'Concerto for Bass Trombone, Strings, and Piano,' reviewer Peter Jacoby wrote that the soloist 'played a difficult score very well. It's a score that gives the soloist sufficient space and opportunity to show his dexterity. And to show his sensitivity to subtleties . . .' Dave Anderson has written many compositions for his own instrument, including the 'Concerto for Double Bass, Strings, and Harp,' commissioned and premiered by the Philadelphia Orchestra. His 'Quintet' for oboe, clarinet, violin, viola, and double bass has been recorded by the Kentucky Center Chamber Players on a Centaur label.

Here's what you say about
Ed Anderson - Occasional Clam.