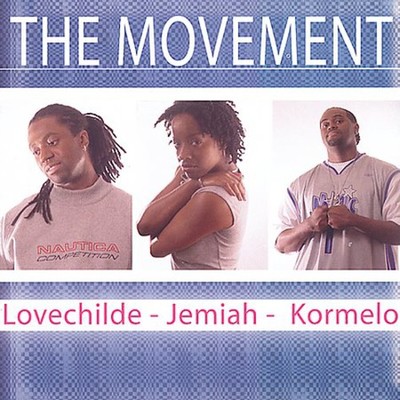 LJK (Lovechilde - Jemiah - Kormelo) Biography Three hot new artists have come together to reinvent the wheel or shall we say the disc. Their debut album, THE MOVEMENT (LJK), comes one year after meeting each other in the studio doing separate projects. They started conversing about how great it would be to work and support a project together, in lieu of flying solo. At the time they were just joking around, but the joke later became an idea and that idea formed a hot and soulful movement. From the beginning things were different. There were none of the tense moments and issues found when forming a new group because they already new each others vibe and capabilities. Lovechilde had already been producing and recording with both Jemiah and Kormelo separately. Working together only enhanced what was there and made it better. Now their crowd pleasing project and performances consistently fill dance floors, rock concerts and festivals. Lovechilde (L) from North Carolina, has been writing, arranging, producing and performing music for many years, working with such R&B funk-sters Cameo and the gospel group Terry Letman & Friends. He's now one of the most in demand writers and produces in Western Carolina. Whether it's a pop, R&B, rock, alternative or hip-hop production, he does it well. Jemiah (J) 'The Princess' also from NC is an astonishing new vocalist found singing in church by Label Owner / Producer Terry Letman. Classically trained in voice, piano and clarinet she sounds like an angel and effortlessly performs perfection. Kormelo (K) from Tennessee has been the lead singer for several regional groups like Qwest and 2BTrue, and has opened for many acts such as Eight Ball & MJG, Ludacris, G-Dep and Juvenile. After attending The Recording Workshop in Ohio (Late 2002) he received an audio engineering certificate and established Lost Tribe Productions. Together they have created a classic. THE MOVEMENT (LJK) is beyond neo-soul. It's what we like to call soul-hop. Some of the songs, like 'In The Club,' 'I'm Gone,' 'Let's Get Away' and 'Everyday Everyway' depict a divers array of R&B styles. Other songs, like 'Work It Out,' 'Good Times' and 'Let's Get Rowdy' (a reggae influenced hit) are eclectic urban / pop bangers. 'I Really Miss You' (a crossover hit) was written with mainstream radio in mind. All the songs are great on CD but are ultra incredible live. (LJK) prefers working with their 6 piece band and have had the opportunity to open for George Clinton, Van Hunt, Theodis Ealey and many others. Their performances are just infectious to making you move. Rep: Terry Letman 828-285-9786 [email protected]

Here's what you say about
Lovechilde - Movement / Various.