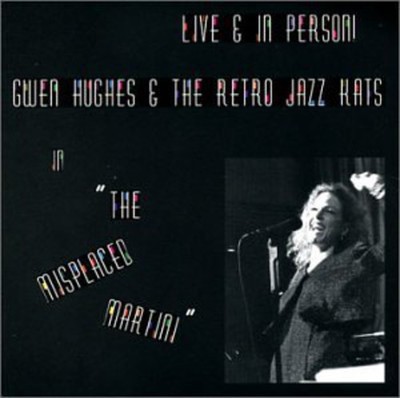 Creative Loafing Atlanta) Reader's pick for Best Jazz/Swing Artist 2000 and 2002! 'The Misplaced Martini' takes you where jazz is fun, freewheeling and...sly. Imagine sitting in a club or cafe, at a remote table, waiting for the new band to make an appearance. The air is heavy with smoke, the brightest light is directed at center stage. Cigarette girls sashay by, martinis glint in the stage light. But you haven't stepped back in time. This is now. 'Originally, ' says Gwen, 'I was caught between two genres of music. I had been singing in pop bands for a few years, but was restless inside this particular form of music. I wanted to stretch little more than the usual pop fare allows...but jazz gradually began to feel more like home.' Following her introduction to and collaboration with Bill Wilson (a talent as great as his father, Teddy), Gwen was introduced to many of Atlanta's prominent jazz musicians (see the list below). Her collaboration with them, plus her early experience in theatre and rock n' roll, led to a sound that's caught somewhere between jazz and pop and big band. More recently, Gwen's sense of adventure has taken her into the even more uncharted waters of jazz and folk fusion. This recent exploration results in her latest album, 'Lost & Found.' Creative Loafing again lauds the effort, calling it 'daring and experimental.' 'I suppose you'd call me a song stylist,' she says. 'I learn from Fionna Apple as much as Sarah Vaughn. Cassandra Wilson is my true arrangement heroine, and Sarah Vaughn, Sassy, is my scatting muse. I have a long list of heroes and heroines alike. And then there's Sinatra, who made it possible for all of us to break the rules. It's all about adventure, not being hemmed in by 'categories' of music. Think outside the box.' Gwen released Torch Life in 1997 - and it was given a 'special merit' nod by the Grammys that same year, for 'best jazz female recording' and 'best jazz performance.' It's romantic nostalgia that is also startingly contemporary. Additionally, her band is now one of the premier swing bands in Atlanta, and The Atlanta Journal Constitution declared in 1998, 'Gwen Hughes was swinging before swinging got cool.' 'We are the real thing, jack, true jazz musicians that aren't posing as swing cats, ' Gwen states, 'that's why the band is called, 'The Retro Jazz Kats,' a legit combination of true jazz and the dance we call 'swing' right now.' Players in The Retro Jazz Kats include Bill Wilson, Bob Cardone, Arthur Turner or Bill Anschell on piano; Ken Gregory and Joe Gransden on trumpet; Bob Lewis and Adam Mewherter on trombone; Nick Longo, Eric South, or Sam Skelton on the saxophone; Steve Cunningham on guitar; Neal Starkey on bass; and our faithful backbeat is Forrest Robinson (when he's not touring with INDIA.ARIE) on the drums. The combined experience of these guys ranges from clubs in New York to Miami...orchestras in Georgia and Washington, DC...original music for the Olympic Games...back-up work for almost every R&B act that comes to town...

Here's what you say about
Gwen Hughes - Misplaced Martini.