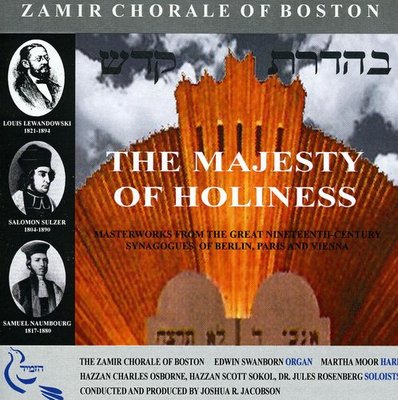 Since it's formation in 1969, this 50-member adult chorale, dubbed a 'virtuoso outfit' by the Boston Globe and recognized by American Record Guide as 'America's foremost Jewish choral ensemble,' has remained committed to the highest quality performance of music spanning thousands of years, four continents, and a variety of styles, both popular and classical. The Chorale's repertoire includes Jewish liturgical pieces, major classical works, music of the Holocaust, newly commissioned compositions by contemporary Jewish composers, and Israeli, Yiddish and Ladino folksongs. Zamir, which means 'nightingale' in Hebrew, currently has thirteen recordings on the HaZamir label, ranging from Baroque masterworks to seasonal celebrations. The Chorale's 1999 tour to Eastern Europe is the subject of the PBS documentary Zamir: Jewish Voices Return to Poland, broadcast on public television stations throughout the United States and shown at several film festivals around the country. The Zamir Chorale of Boston has performed throughout North America, including Boston's Symphony Hall, Tanglewood's Ozawa Hall, and venues in California, Wisconsin, Florida, New York, Montreal, and Washington D.C. The Chorale has also toured Eastern Europe, Great Britain and Israel, appearing with the Jerusalem Symphony and Israel Philharmonic Orchestras under Zubin Mehta and Daniel Barenboim. In 1978 Zamir received the Silver Medallion award from Boston's Association for the Performing Arts, in 1988 the Myrtle Wreath award from the New England region of Hadassah, and in 1992 the Klal Yisrael award from the Synagogue Council of Massachusetts.

Here's what you say about
Zamir Chorale of Boston - Lights: Music for Chanukah.