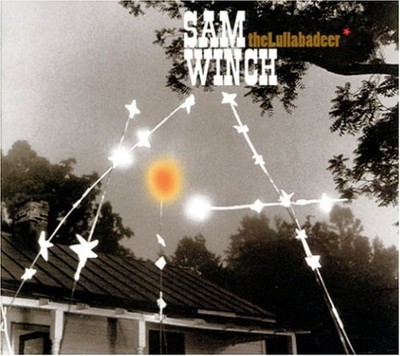 From Allison Stewart/NO DEPRESSION: 'One of the year's sweetest, weirdest debuts' - 'With a pointillist's eye for detail Winch learned early on that it's not just the story you have to tell; it's how you tell it that counts.' Adrian Denning: Oh my god, the noisy circus rock n roll country of 'OneTwoThree' sounds like Lou Reed with a poker up his arse and a dead Gram Parsons sharing eight whiskeys with him whilst they both proceed to have a hell of a fun time. Jim Lundstrom/Gannett: Think of singer/songwriters and you get the image of solemn, earnest folk played on an acoustic guitar in a tiny, quiet coffeehouse. Don't nod off yet. 'The Lullabadeer' will dispel that particular notion. Appleton, Wisconsin native Sam Winch, The Lullabadeer, pushes the singer/songwriter thing into uncharted territory with the release debut 'The Lullabadeer,' featuring Winch's heartfelt and heartbreaking vocals in front of a 10-piece band that includes traditional drums/bass/guitars/piano, as well as umbrellas, megaphones, skeletons and trombones. Winch pushes his supple voice like a master instrumentalist on a well-tuned instrument through the 13 songs on this beautifully crafted CD. Standout tracks include the rip-roaring opening tune 'TheLullabadeer,' the guitar-driven rocker 'Banter for the Common Man,' the funny and sad 'Graduation Day,'the melancholy 'I Got Some Moves,' the sunny 'Always the Weekend,' the ode to marriage called 'Pachabel's Pistol' and...well...they're all standout tracks. * * * * * * * * * * Sam Winch was born outside of Philadelphia in a bowling alley. His friends kid that he comes from the gutter. He was orphaned and then adopted by a generous couple running a girls home for delinquent teens. At the age of three the generous couple moved the family to Wisconsin. Sam was not an outstanding child, though he once saved a baby from a falling hammer by taking the blow himself. The scar still remains just below his hairline. Some say it looks like a diamond; others say it looks like a tear; Sam says: 'at some point it turned, it bent, it hunched me at the shoulders, broke me at the belt'. He was lost for a week when he was nine. He was found in Baraboo, Wisconsin. Under the Big Top...asleep in a circus wagon...gifted a ukulele by a clown... Sam Winch, The Lullabadeer, is based in Appleton, Wisconsin. His debut record, 'The Lullabadeer' is being considered for the Nobel Prize.

Here's what you say about
Sam Winch - Lullabadeer.