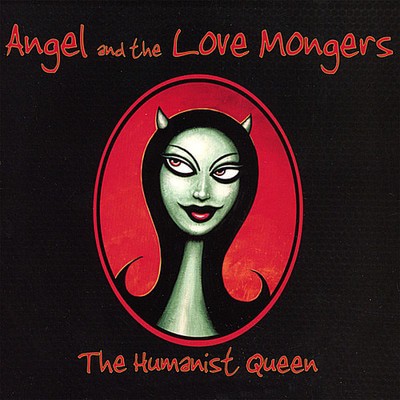 The Humanist Queen: Co-produced and mixed by legendary producer Mitch Easter, Angel and the Love Mongers' second album, 'The Humanist Queen' is a gem of Brit influenced pop rock that covers miles of musical ground in 12 diverse and remarkably well crafed songs. Angel and the Love Mongers: Have you ever wondered what would happen if Jeff Buckley had met John Lennon and they had formed a band with the members of The Cure? Although that doesn't necessarily describe Angel and the Love Mongers' sound it certainly shows how difficult it can be to characterize this band's unique and oppositional approach to music. Hailing from Knoxville, TN, Angel and the Love Mongers was formed in the spring of 2004 by singer/guitarist Angel Zuniga and drummer/engineer Eric Nowinski. Angel and Eric were drawn together to form a band due in part to their diverse approach to music. Angel, who takes many of his musical cues from alternative dance bands of the 80's such as Depeche Mode and Erasure, was a former actor and model who confesses to have spent his formative years in front of a mirror practicing his dance moves instead of playing air guitar. On the other hand, Eric, who cut his teeth on The Beatles and spent his youth playing air guitar to Queen and R.E.M. recently gave up his career as a trial lawyer to pursue music. At first glance, this would appear to be a mismatch of cosmic proportions. However, the diametrically opposed approach to their music is one of the things that separate Angel and the Love Mongers from the cookie cutter bands that are commonplace today. Angel and the Love Mongers first album was a collection of 11 catchy alternative/pop songs produced by Don Coffey, Jr., of Superdrag fame. The album received critical acclaim and was a mainstay on college radio stations throughout the country. However, not wanting to repeat the successful formula of their first album, Angel and the Love Mongers sought out the help of legendary artist/producer Mitch Easter (R.E.M., Wilco, Let's Active) to tackle their much more mature sophomore effort. The culmination of this effort is "The Humanist Queen" which will be released this summer. Although, "The Humanist Queen" can be celebrated for it's lush arrangements, soaring harmony vocals and Beatlesque song craft, the albums lyrics take a dark and sometimes abrasive look at the motivating elements of power and control in today's culture. Once again, this oppositional approach to songwriting results in a unique yet somehow indulgent musical canvas where the listener can actually choose what direction they want the music to take them.

Here's what you say about
Angel and the Love Mongers - Humanist Queen.