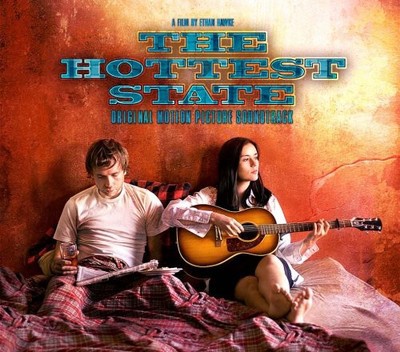 The soundtrack for the film, the Hottest State isn't just another compilation of songs pulled out of obscurity and thrown together for a movie companion piece. No way. If anything, this album and it is indeed, an album could also be categorized as a tribute record. The album features sixteen songs, plus two score passages, all recorded exclusively for the film by some of the finest names in music today, all for the benefit of paying tribute to one of the brightest new songwriting talents in the last two decades: Jesse Harris. Grammy winning singer/songwriter Jesse Harris wrote all the music for the soundtrack and serves as the album's co-executive producer along with the film's director/screenwriter/producer, Ethan Hawke. Together, they assembled a peerless group of artists to record Harris' songs: Willie Nelson, Emmylou Harris, Norah Jones, Cat Power, Bright Eyes, Feist, the Black Keys, M. Ward, Brad Mehldau, Tony Scherr and Argentinean newcomer, Rocha. Jesse Harris recorded three songs for the soundtrack himself and also has a small role in the film. The soundtrack will be the second release by Hickory Records, the new imprint of Sony/ATV Music Publishing. Harris, who has known Hawke since the early 1990s, has released six albums as a solo artist. His songs have been recorded by Madeleine Peyroux, Pat Metheny, and Lizz Wright, and in 2003, he won a Song of the Year Grammy for writing Norah Jones' smash hit Don't Know Why. Adapted by Ethan Hawke from his novel of the same name, the Hottest State is a bittersweet romance that distills the joy, pain, erotic highs, and emotional lows of first love. Hawke directs and co-stars in the film along with Mark Webber [Broken Flowers] Oscar nominees Catalina Sandino Moreno [Maria Full of Grace], Laura Linney [Mystic River, the Squid and the Whale], Michelle Williams [Brokeback Mountain] and Sonia Braga [Kiss of the Spider Woman]. The movie opens in New York and Los Angeles on August 24, and nationwide throughout September.

Here's what you say about
Catalina Sandino Moreno - Soundtrack.