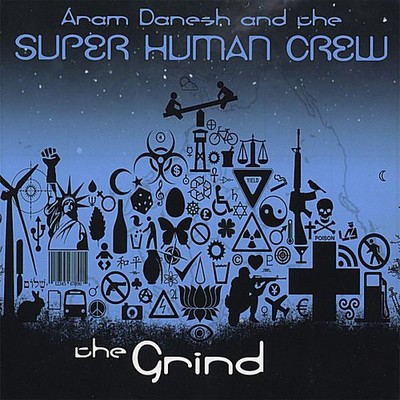 Aram Danesh and The Super Human Crew are Aram Danesh on guitar, Adam Goodhue on drums, Sam Bevan on bass, Jason Moen on Keyboards and four vocalists - Keith Pinto, Dan Wolf, Carlos Aguire and Tommy Shepherd. Aram and company have created an omnivorous groove incorporating rhythms from all over the world, producing a harmonious vibe honoring all cultures and acknowledging the connection between all people in the global village. The debut CD, The Spot, which was released in 2005, garnered critical praise for it's fresh, imaginative blend of diverse styles. On disc, The Spot was a multi-cultural extravaganza featuring the best talents from the San Francisco Bay Area\'s diverse musical communities - Afro-Cuban, hip-hop, Brazilian, rock, funk, reggae, and jazz. About.com called the collection \'...A musical salad...well-crafted and fun listening,\' while URB Magazine/Rebel Organization writes \'If this project were a Quinceñera, the blow-up castle in the front yard would be made of bright hip hop colors with rock guitar...while old world influences coyly flirt with young electro blips in white lacy dresses in the backyard. \' Jive on the web gave The Spot five out of five stars. Additionally, Tastes Like Chicken found the album to incorporate \'...Eight songs that dip in and out of literally every kind of music known to man ... solid, through and through.\' The new songs look fondly back at the hard rock, funk and R and B of the mid 70s, updating them with the band\'s trademark combination of pop, hip-hop and international flavor. Stevie Wonder\'s \'As\' is reinvented with a socially conscious anti-war lyric and a swinging hip-hop beat, while other tunes take a more straightforward approach to R and B and rock.

Here's what you say about
Aram Danesh & the Super Human Crew - Grind.