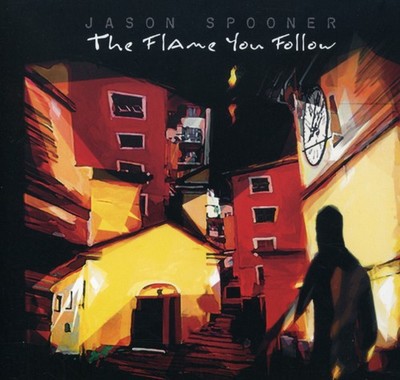 'Sophomore Slam' Jason Spooner delivers an ambitious second album that draws heavily upon the power of three. In stores June 1, 2007 The follow-up effort to a successful debut album has always represented a potential "Bermuda Triangle" in the career path of every songwriter. Some choose to replicate while others become submerged by the weight of expectation. In the case of Jason Spooner's The Flame You Follow, the choice could not have been simpler: reinvention. Armed with a sound and a clarity of purpose that can only result from countless live shows and years of ensemble-performance, the trio, fronted by Spooner and rounded out by Andy Rice (bass) and Reed Chambers (drums), quietly entered a small rural studio in the dead of the Maine winter and set to work. Jason recalls, "We barely even spoke about the particulars at first... we all simply knew that it was time to make this record and that it was going to be a far cry from previous efforts. Our first album felt more like a collection of solo songs with the band folded in as an afterthought. We all felt the same need to build this record from the ground up around the core sound of the band... a sound that has been percolating independently for quite some time." The resulting urgency and energy captured during these sessions is apparent from the first seconds of the lead off track "Black and Blue", which quickly establishes the cast of characters that accompany the listener throughout. Chambers' infectious rim pattern is eventually joined by the gigantic foundation of Rice's upright bass, followed by Spooner's signature tenor and finger-picked fretwork on the acoustic guitar. The stage is set. From here on, the listener traverses a varied sonic landscape of complimentary colors that work together to create interesting twists and turns while remaining loyal to the unique vision of the record. The character-driven 'All That We Know' is a vivid account of a deal gone bad, complete with crystalline vignettes and tremolo guitar flourishes. The anthemic 'Spaceship' glides to powerful sing-along crescendo's at the hands of Rice and Chambers while providing insights around the human condition and the need to disappear. The moody, Wurlitzer-driven groove of the album's title track, 'The Flame You Follow' embraces the hook-laden choruses and provides foundation for the song's haunting dreamscape imagery. The deceptive innocence of 'Simple Life' draws the casual listener in with hints of Motown-infused horn and bass lines driven by an unrelenting two-and-four snare followed by musings on life in the modern world. The sinister "Hitchcock-meets-Tom Waits" swagger of 'Fight the Fire' paints a tale of mystery punctuated with organ wails and a carnival of sax work. The album eventually subsides with Hover, a song that fuses graceful string work with some of the album's most emotionally raw vocals and song-writing. Recorded with celebrated New England engineer, Jon Wyman (a seasoned music man with strong rock, alternative and hip-hop sensibilities), the trio felt extremely comfortable at the thought of exploring new ground while drawing upon their collective well of influences. Spooner's heroes are certainly present in spirit (Neil Young, JJ Cale, Johnny Cash, Leonard Cohen, Tom Waits, Paul Simon), however there is a sense of maturity and reverence here that has allowed Spooner to tip his hat while maintaining and furthering his own voice and point of view. Also present is the strong influence of the impressive group of guest musicians hand-picked by the band to participate including Tim Carbone on fiddle (Railroad Earth), Ryan Zoidis on saxophone (Soulive, Lettuce, Rustic Overtones), songwriter Kim Taylor on guest vocals, Andy Happel on cello & violin (Thanks to Gravity) and Abbie Gardner on vocals & dobro (Red Molly). In a day an age where high-speed, on-demand technology has flooded the market with singles and threatened the album itself as an art form The Flame You Follow is a refreshing reminder. "My goal from the early writing stages of this record" Spooner explains "was to create a piece, a collection of songs where the whole felt great than the sum of the parts. All of my favorite records were pieces; Dylan records... Floyd, Bowie, Beatles... we all focused on keeping this cohesive from day one." Spooner also comments on the project's interest in exploring the darker corners of the streets. "I'm admittedly a fan of records that delve into the shadows a bit. Neil Young's beautifully dark Tonight's The Night was a formative record for me. Pink Floyd's Obscured By Clouds " is another major one... and certainly Patty Griffin's masterpiece Living With Ghosts." The results, through Spooner's lens, are brave portraits of struggle, self discovery and, eventually, wisdom.

Here's what you say about
Jason Spooner - The Flame You Follow.